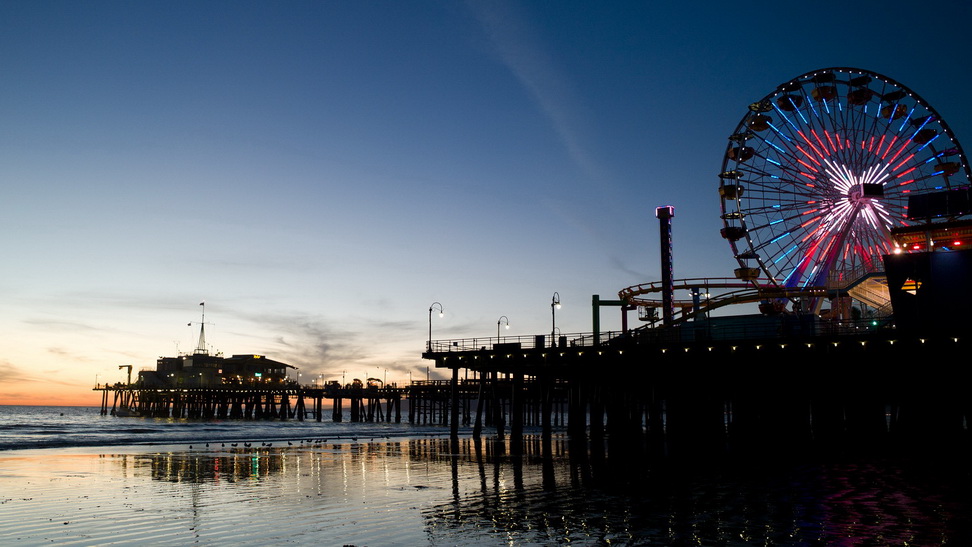 What is so alluring about walking out on a pier? Looking out to the open sea with only the sparkling surface and horizon to admire is mesmerizing. You can gaze into the depths from a bird’s eye view, admire surfers, and study the coastline. Unlike lake piers, experiencing an ocean view pier is a West Coast pastime and Southern California has the most piers in the country. In this post I’ll share a bit of personal and historical details about local piers and an itinerary for a pier-full road trip.

In the 1800’s piers became a part of California’s culture. At first steamships moved passengers and goods up and down the coast. They’d drop anchor then send their commerce to the beach in small boats. Lumber from the Pacific Northwest was dropped into the water to float to land with the tides. Tiring of the cumbersome task of picking up those logs, in 1872 entrepreneur John P. Stearns convinced investors to help him build a long wharf for ships. Both commerce and tourism took off as many towns followed his lead. Today Stearns Wharf in Santa Barbara remains a lure with views of the waterfront to the mountains and out to the Channel Islands.

In the early twentieth century ocean resorts were all the rage in Southern California and became destinations in themselves. They drew crowds seeking cooling ocean breezes and a chance to cool off in the waves, much as we do today. But imagine bouncing around in the waves in a knit wool jumpsuit or strolling the boardwalk with full length dress over a corset and carrying a parasol. After WW2 the suburbs and California’s car culture flourished. Going to the beach was a popular ritual year round.

Here’s a short video of the Pacific Ocean Pier in Long Beach:

Pacific Ocean Park in Long Beach thrilled crowds from 1958 to 1967 with rides and concerts built out from the boardwalk to the pier. I’m dating myself but fondly remember holding my father’s hand as we walked through lurid undersea adventure displays and I loved watching the rides that flew out over the water. Unfortunately, the Park was hard to keep up and shuttered within ten years before burning down. Later in efforts to compete with Disneyland another theme-ride pier with a sea circus was built near Los Angeles. Today’s Santa Monica Pier is a nod to that past and home to California’s only over-the-water Ferris wheel, The Pacific Wheel. It’s a popular spot that’s packed on weekends and it also draws anglers hoping to catch dinner.

A storm breaking over the Ocean Beach Pier:

There are so many reasons to visit an ocean view pier. Many trek out with a fishing pole in hand to catch dinner and relax. Others stroll along on romantic rendezvous. Piers can provide shelter from storms for humans as well as scientific equipment. Other piers incorporate museums, souvenir shops and restaurants. Walking out to the end of a pier for dinner or breakfast is a special adventure.

Here’s a highly personal list of some of my favorite pier pleasures in Southern California. 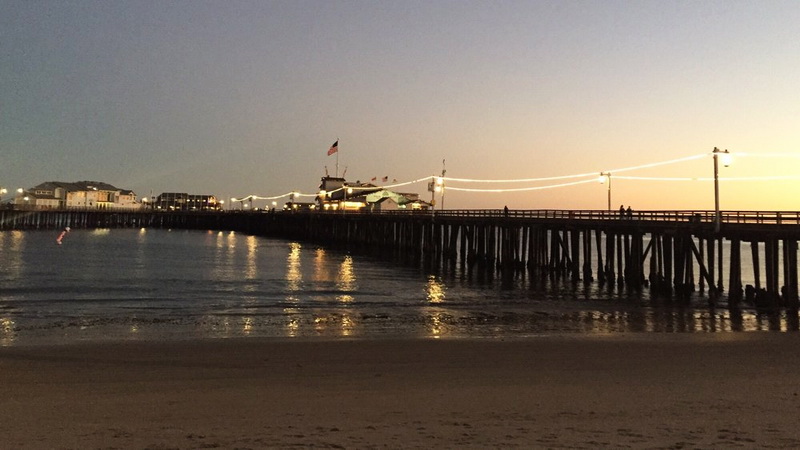 Twilight looking west from the beach to Stearns Wharf

One of the few car-friendly piers in Southern California. Drive out to the restaurants or visit the Santa Barbara Museum of Natural History If you’re looking for more of a stroll take your chances dodging waves along the harbor jetty north of Stearns Wharf. Admire the fishing boats, the Maritime Museum, or go kayaking. 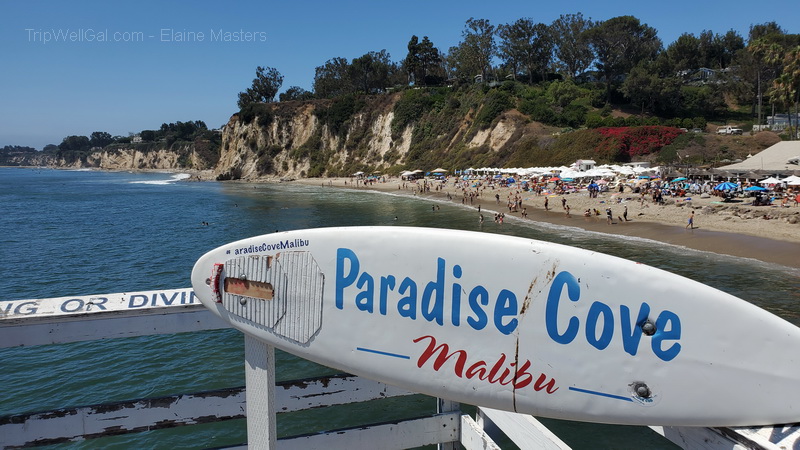 I’ve seen it in TV shows and movies but just visited the Paradise Cove in Malibu. It’s a legendary surf spot. Celebrities like Marilyn Monroe are memorialized in portraits covering the walls of the cafe. The Beach Boys shot an album cover and Sea Hunt with Lloyd Bridges used it as a backdrop. Today the small bay is a playground for families. The Paradise Cove Cafe and bar is packed at all hours on the weekend. And the views are almost too perfect. Arrive early to claim a plot of sand, put your name on the list for a table in the café and stroll the pier, of course. 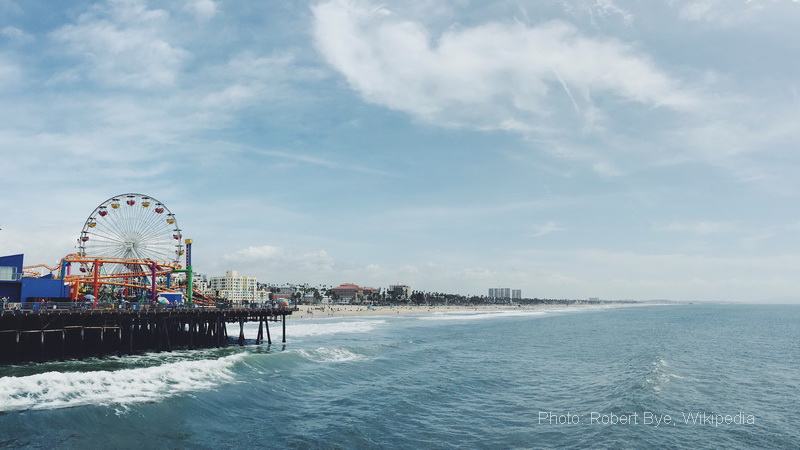 The Santa Monica Pier was built in 1909 at the end of what became the classic Route 66. Today the pier has California’s only over the water Ferris wheel, The Pacific Wheel. The popular spot is packed with shops, street performers and crowds on weekends. It’s also a fishing pier. Rotating art shows and concerts set up adjacent to the pier and the Santa Monica village shopping district is a block away.

While the Huntington Beach pier is the most famous (and crowded) I prefer visiting the Seal Beach Pier when I’m in the Long Beach area. It’s a quieter vibe and has a long history. Seal Beach was the end of the line for the Red Car rail line that swept through Southern California before the freeways took over. You can find out more at the Red Car Museum in Seal Beach.

Built in 1904 and rebuilt after two storms in the 1980’s, the Huntington Beach Pier stretches 1,853 feet from the sand to the sea. It’s one of the longest on the West Coast. 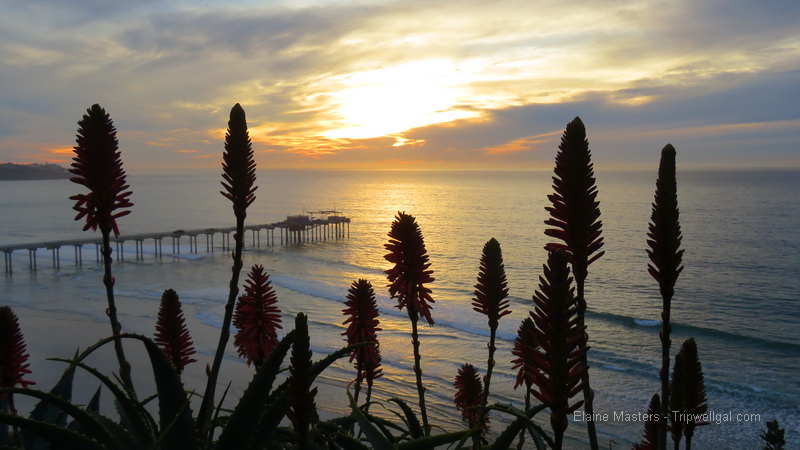 La Jolla Scripps Pier from the hill at UCSD

Not generally open to the public, the Ellen Browning Scripps Pier in La Jolla is one of the world’s biggest research piers with equipment tracking ocean conditions both above and below the waterline. Since 1916 data collected here reports on ocean conditions which helps track changes in the coastal waters. Pipes also bring fresh sea water to the NOAA and Scripps Oceanic Institute on the hill above.

The pier stands at the north end of La Jolla Shores beach and is a popular spot for sunset pictures and wedding shots between pilings and waves. 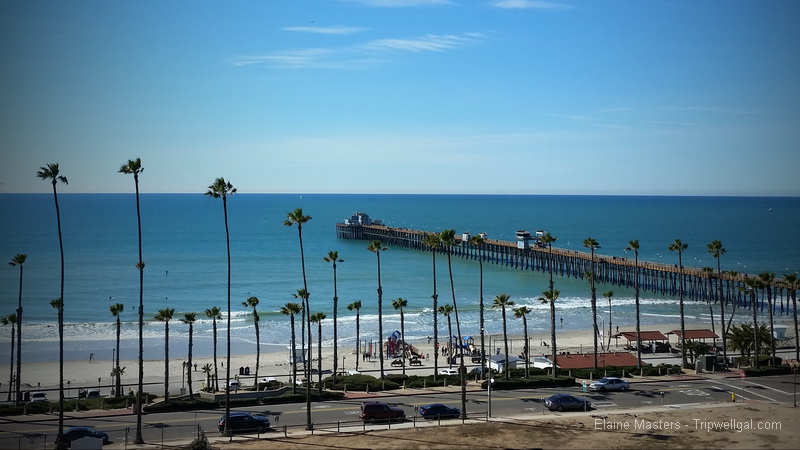 Here’s the longest wooden pier in Southern California at 1941 feet. Ruby’s famous diner sits at the end and on the beach level there’s a small amphitheater which hosts concerts. The pier is a top spot to observe surf competitions, Iron Man, Fishing Derby, Classic Car Shows. the downtown area is percolating with the Oceanside Museum, a Surf Museum and on Thursdays, the Farmer’s and Sunset Markets. Here’s more about what to do in Oceanside.

Inside the Dress Rehearsal Show at the Oceanside Museum of Art

San Diego’s picturesque Crystal Pier, located in Pacific Beach, dates back to the 1920s when bootleggers tossed barrels onto the beach and smugglers ran goods down the dock. It’s much tamer today and hosts the Crystal Pier Hotel, which consists of several cottages where guests can enjoy the gorgeous seaside views. 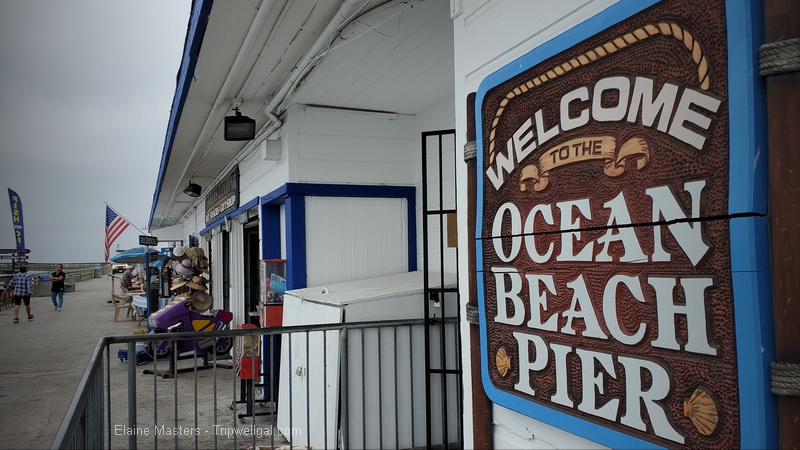 OB as locals call it, keeps its hippie village vibe with head shops and one of the most colorful hostels in California. The characters along the beach walk are colorful too, happy to sell their handmade trinkets to support their lifestyle. The pier twists northeast at its end past the _______ Café, which makes it a great spot to watch surfers below. South of the pier is a sweet beach walk over wind and sea carved sandstone. 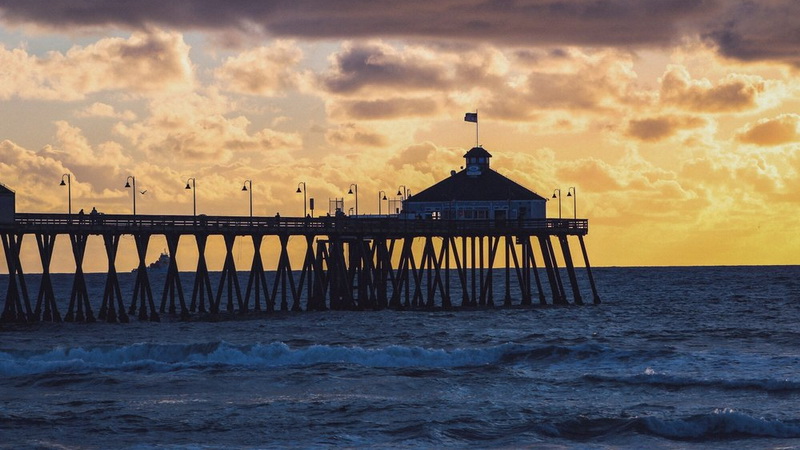 This is the last pier along the coast and just north of the Mexico border. The proximity makes the water dangerous for months of the year as storm surges pour toxic waste down the channel to the sea. Still it’s well worth a visit. Trails lace through the Tijuana Estuary State Park and the town hosts one of California’s biggest sandcastle competitions yearly.

Not everyone comes for the ocean view pier opportunities. Fishing has always been a big coastal pastime in California. Most fishing piers were built in the second half of the 1800’s and in the early 1900’s. Most that have survived storms and fires are still open to fishing and many don’t require a fishing license to cast a line. A few are closed to public access unfortunately, but they can still be photographed from the shore. Here’s a list of the fishing piers and regulations along the California coastline.

How to live a global life 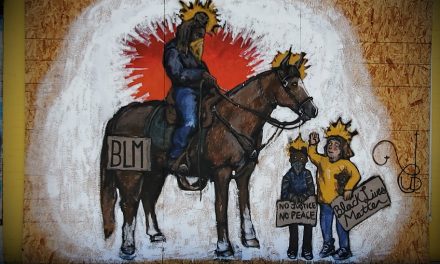