The sea lion nudged her newborn and he replied with a muffled squawk. They didn’t mind that a dozen awed, camera-clicking fans stood about ten feet away. That’s just one of the wonders I witnessed on the Galapagos Islands during my Sea Star cruise with Latin Trails.

The pair rested less than two feet from the after-birth – a smudge of red in the sand – as a several hawks swooped close. “The Kings of Santa Fe Island” our Galapagos Park Naturalist, Hanzel Martinetti, called the ruddy birds as we watched the drama unfold. They were after the remains and would snatch the baby if the mother dropped her guard. Luckily, the Raptors kept their distance while we were there. I knew the Galapagos Islands are sanctuaries of stunning wildlife and the source of Charles Darwin’s evolutionary discoveries. I packed a small, species book but that was about the extent of my knowledge before the cruise. Hansel filled in so much.

Here’s a short video from our first day on Espanola Island:

We flew to the islands from Quito. As soon as we landed on San Cristobal Island, Hansel ushered us onto a bus to see the Giant Land Tortoises. Over six days he offered commentaries and answered questions at every pause while we trudged across the islands In the evenings, he led optional talks about sea lions and birds. He also made sure that we never ventured too close to the wildlife and kept us on the marked paths. The guides have a gentle protocol that preserves the experience and lessens the impact of tourism. If we approached another group, we’d stop until they passed, or turn away to follow an adjacent trail. We hardly saw other humans. All this natural bliss was wrapped in the luxuries of our cruise on the Sea Star. I shared a cabin and it was large. I had room to do yoga on the deep area carpet and could watch the stars from our deck. The bathroom was spacious with more than enough counter space for a pair of traveling gals. Double cabin on the Sea Star Granite counters on the Sea Star

Breakfast featured a full buffet and omelet station. We had an espresso machine to use on demand! Each meal featured fresh ingredients and beautiful presentations. Those who had dietary restraints were accommodated quickly too. Two of my favorite parts of the cruise were returning from our morning outings to a wet towel, juice or ice tea, and trays of snacks on the deck at a large dining table. After snorkeling or kayaking the cool waters, there were two (!) enormous hot tubs on the top deck. I warmed up in the bubbling waters and shared stories over Pisco Sours while waiting for the sunset. What luxury. Who goes on a Galapagos Islands Cruise?

My fellow travelers were a more varied bunch than expected and so interesting. I traveled with another writer who called New York City her home. We shared a dining table with a young couple from the Czech Republic and a gentleman from Quito. A pair of jet-setting newlyweds joined a couple from Florida, who were celebrating their fiftieth anniversary. One solo woman, a millennial from France shared a table with three from Germany – a father and daughter plus another solo woman. A videographer from South Africa rounded out the group. Was this representative? I can’t say but it was a fascinating, diverse, and engaging travel family to explore the islands with. Ship to shore wet landing on the Galapagos Islands.

Ship routines flowed flawlessly. The staff, all Ecuadorians, seemed to enjoy their work and one day joined us on an island for a crew soccer game while we snorkeled with sea turtles. If we needed anything, they were there to help. I was thoroughly spoiled! Flamingos dining in an interior lagoon. And about the wildlife! Iguanas – marine and land; nurseries, piles and strutting kingpins – made regular appearances. More than once a sea lion chose to sleep in the middle of our path. We carefully stepped around. Bright Tanagers and crimson-chested Frigate Birds stood out. Lava Lizards watched us from poles and rocks. Blue-footed and Nasca Boobies stood by as they preened or nested. Land iguanas aren’t shy or aggressive in the Galapagos Islands

“Too many sea turtles!” we joked after snorkeling one afternoon. I had been in the water less than 5 minutes when a giant turtle swam next to me. When I came in closer to shore to tell my group, they just pointed. There, floating expertly among the bright green algae covering the rocks were nearly a dozen feeding turtles! They hardly looked at us bobbing nearby and more than once I had to arch to avoid their shells as they swam below me in the shallows. Wow. Just wow. The Galapagos Islands are a wonder and carefully managed. Only 87 ships are allowed to tour the archipelago at a time. We never saw more than four at any of our island stops and these were smaller yachts – no more than 25 passengers. A few 100-passenger ships anchored near the Baltra airport or passed us while we traveled at night. I never saw garbage on the beaches or in the water outside of the San Cristobal or Puerto Ayoura villages. From the Leed certified airport in Baltra to the labeled bins throughout the urban areas, the Galapagos Islands are working to take management, conservation, and recycling seriously. If you go to the Galapagos Islands: My trip was hosted by Latin Trails and you can see the ship itinerary here. Although I was their guest, all opinions and photographs are my own. 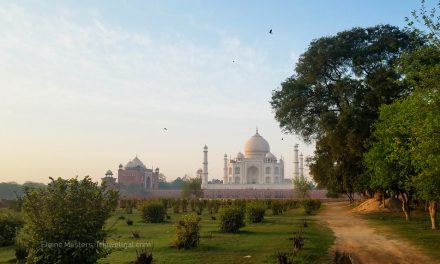 First time in India? Join a travel group to see the best of Rajasthan