Molto Male! How horrible to miss the Prati District in Rome. If it weren’t for the Roman Food Tour, I’d never know the tasty treasures it holds. After days combing the city’s famous landmarks, we met our tour in the plaza of a subway station near the Vatican. It was easy to spy our small group. Within a few hours we had bonded over tasty bites and delicious wines, learning to eat local as curated by our guide, the effervescent, Jess.

For several years, Jess has led the Roman Food Tour company journeys. Italy is in her blood. After living in the US, she returned to her family’s country and make Rome her home. All that’s to say, she’s fluent in English and Italian (plus other languages!) Her passion for fine food, traditional ingredients and authenticity were infectious. Eat local in the Prati District

The Prati district is a working class neighborhood that’s picking up steam. Grand, old buildings are filling with office workers and families wanting to be close to their business. The area quietly percolates in the evening. Locals fill restaurants, cafes, clubs, and bars. On weekends a high-end shopping avenue, the Cola di Rienzo, is buzzing. During business hours, lawyers move quickly across the Palazzo di Giustizia, on their way to and from the Supreme Court. There aren’t monuments for tourists to clamber over but they’re most welcome to join hungry guests who know how to eat local and well. The Prati neighborhood also houses Rome’s largest indoor marketplace, the Mercato Trionfale. It originally opened in the 1930’s and became one of the largest marketplaces in Italy. Since 2009 it’s housed in a new glass and steel building along Andrea Doria Road. We returned to explore it the day after our tour and eat local with a few chunks of cheese and snack supplies. We started our food tour slowly with a bit of education and the night progressed, as more wine was poured and company relaxed. Jess fed us well with tasty clues on how to choose authentic cheeses and aged vinegar samples at Le Chiccherie cheese shop. Their specialty is Mozzarella di Bufala from the Campagna region. You’ll have to watch the video on how to recognize fresh Mozzarella.

Secondo Tradizione is a treasure trove of fine meats and wine. Once we were seated and clinking glasses in toasts, Jess ventured upstairs to chat a moment with a family who had returned for more after taking the tour a few days earlier. My time in Rome was too brief to follow their example! Did you know that most pizza makers in Rome sell by the slice? ‘Pizza al taglio’ is sold by weight. The server will have you tell them how much you want and then weigh the slice before handing you a bill. Talk about how to eat local, I wish the US followed that example. According to our guide, most places still follow the tradition but at Bonci you pay extra for fame and innovative quality. The Pizzarium is open to the street and on our Friday evening, a crowd was scattered at the few tables and benches along the sidewalk. This is pizza inside Bonci Pizzarium!

The names of the pizzas and the lists of ingredients told me that was going to be like no pizza I’d eaten before. From potato (a tradition) to mixes of onion marinated in juniper, fine pecorino, fresh basil slathered with just enough sauce across an incredibly light, slim crust – each bite was a revelation. Rumor has it that the founder, Gabriele Bonci, has opened a Pizzarium in Chicago. Now that’s on my wish list. We were getting very, very full! But the tour continued after a short walk to a family run restaurant, Al Giardino del Gatto e la Volpe. Open for over eighty years, we were treated to two hand-made, menu items – Gnocchi and Ravioli. Settling in at a long table on the back patio, I noticed diners facing huge rounds of pizza. I marveled that a slim miss in a suit had her own. A man nearby hunched over his and a small family had no fewer than 4 personal pizzas in front of them. As full as I was, thankfully we were there for the pasta and Gnocchi. “Like pillows,” Jess described, and she was right. Before parting, we stopped by Fatamorgana, a gelateria. While in Europe, I had been indulging in gelato after walking for hours daily. While it tasted good, I hadn’t a clue about what I was actually eating. Jess enlightened us about the fillers and artificial colorings that most use. Not so at Fatamorgana – each scoop was dense and a marvel of flavors. Ice cream. What’s not to love?! And with that final bite, our tour came to a close. With grace, Jess made sure that each of our small group had directions to get home. I needed a walk and strolled through the broad streets of the Prati, then across St. Peter’s plaza, full of tummy and full of the beauty that is Rome. Special thanks to the Roman Food Tour for hosting us. With tours by day and evening, Sundays and even a Colosseum / Food tour combo there are so many ways to eat local in the ‘Eternal City.’ As they say, “When in Rome…!”

Where to eat local in Rome’s Prati Neighborhood: Sunday morning inside Justin Sterling's Chapel of the Rocks. Lots to think about here. Created from more than 30 broken windows with meditations on protest and good/bad faith. The installation is only one of many inside the Balboa Park, Museum of Art.

You can visit more than 60 museums around the county through Feb. Download a digital pass here: https://sandiegomuseumcouncil.org/specials/museum-month ...

Come forage on the lowest tide in a year!
Shot in La Jolla just before sunset. -2 foot tide and San Diegans came out in force. ...

So many delights. I took the morning off to enjoy high tea with friends at Bliss Tea Treats. The chilly day faded from the moment I stepped into this bright, Mardi Gras cafe and relaxed over tasty treats and conversation. It's a special spot steps from the train station in downtown Oceanside. And leave time to walk down to the pier about 5 minutes away.

Step through the village markets of Oaxaca - A quick glimpse of the local colors and crafts.

Moonlight in the morning (Moonlight Beach, Encinitas, CA) on the day between storms.

My heart goes out to those impacted by the recent rains, but California is a big state and San Diego is doing well. May dams hold, reservoirs fill, floods subside, and the mega-drought be relinquished to history. ...

The Danzante unfolds in front of the Teotitlan Cathedral. Each dancer trains for 3 years and performs over 7 hours on the Dia de la Virgen de Guadalupe.

I was lucky to attend as it began. With special thanks to Kalisa Wells and the people of Teotitlan, Oaxaca.

A moment in the museum at San Bartolo Coyotepec where black clay pottery is the star, but the gallery full of whimsical sculptures by Effrain Fuentes touched me with childlike joy. I'm standing next to 'A Traves de Lentes.' 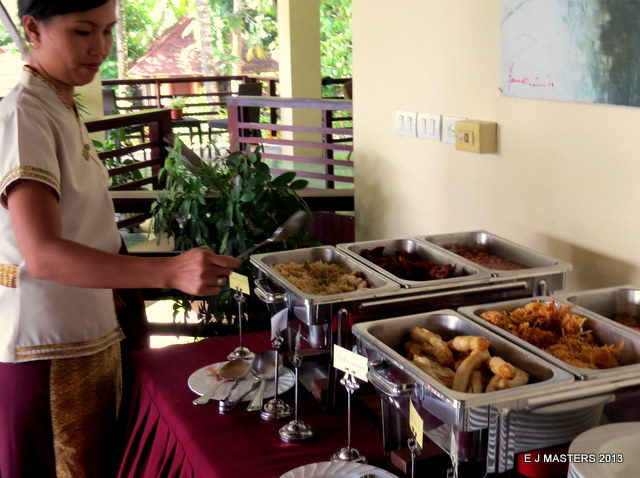 Keep Your Diet on Track While Vacationing