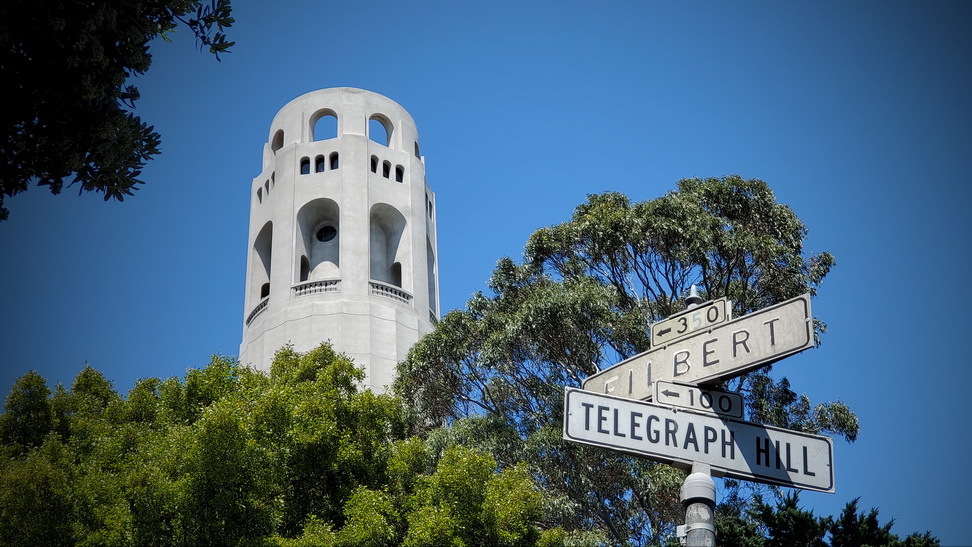 I love urban parks, those surprising splashes of green, fountains, calm and beautiful natural spaces. San Francisco has many but this is about one special trail and the prize at its summit. Various Coit Tower stairs are famous but my favorite is the Filbert Street route. It’s a strenuous climb if you take it fast but that would defeat the reason for going! Savor the journey. At each landing there are views, gardens and details to admire.

(P.S. This post contains Affiliate Links for tours and experiences that I think you might find enjoyable. Affiliate commissions help to keep this blog going and are offered as a service at no extra costs to you.) 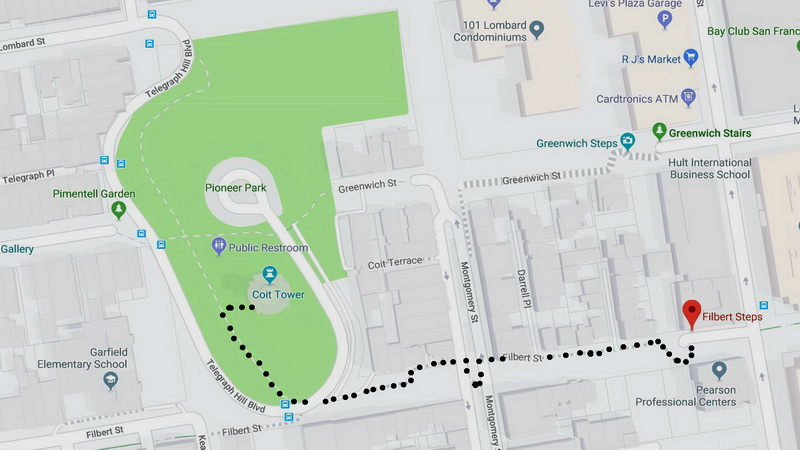 If steep stairs aren’t possible for you or your companions, you can enjoy the steps and views without tackling the climb. Check out the map to see other options that will give you access to the gardens. There are several routes up to the top of Coit Tower Park and Park. One other popular stairway goes up along Greenwich Street. It’s not as crowded but it also doesn’t have the same garden allure. Also, if you don’t have the time or inclination to walk take the #39 Bus up to the Tower. 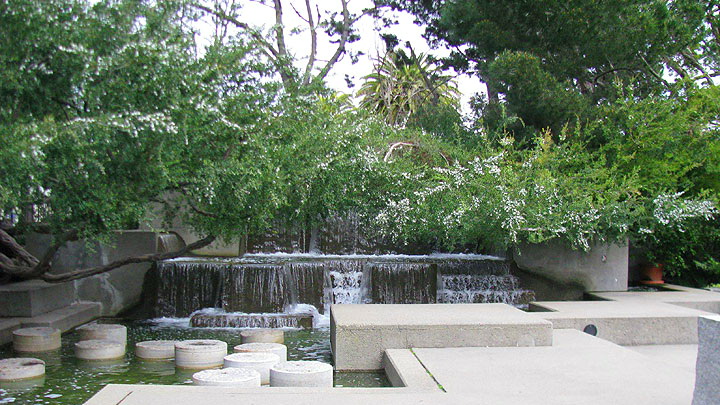 One Levi Plaza Waterfall across from the Coit Tower Stairs

The walk up this route of Coit Tower Stairs begins on the east side of Telegraph Hill at Filbert and Sansome Streets. The stairway is across from Levi Plaza, a great spot for a picnic lunch before the climb. The plaza was designed by Lawrence Halprin. He was hired by the Levi-Strauss family to create a corporate headquarters and park that integrated into the neighborhood and was told that “Monumental isn’t our style.” The modest park has grown into a refuge for office workers in the area. It’s also worth visiting for the Levi shop, blue jean galleries and the tailor’s cubicle. But I digress.

Looking west from the plaza you’ll seet the first set of stairs rising up a steep cliff side between warehouses. Overlooking it all is the prize at the top where the Tower looms. This first section is steep but pause on the landings to admire views to the east and catch your breath. Walk and repeat.

Listen and look closely into the trees as you climb. You may spot some of the wild parrots that have famously moved into the neighborhood. This particular species is quite loud when cross. They are notoriously noisy companions which could explain why someone would release their pet. Several of the earliest flock were sighted with small metal bands on their legs – a sign that they were sold from captivity. Today they are admired in the open skies and treetops of the city.

A homeless musician, Mark Bittner, who took up residence in an unoccupied Telegraph Hill apartment in the 1980’s, started tending to a small flock near where he was squatting. His notes about the encounters became a 2004 bestselling book. That same year filmmaker, Judith Irving released her documentary with the same title, The Parrots of Telegraph Hill. The film chronicled Bittner’s devotion to the birds and his transformation into an amateur avian expert. There’s a happy ending too – the two married after the movie was released and their flock has grown to over 300 birds who can be spotted across the city. 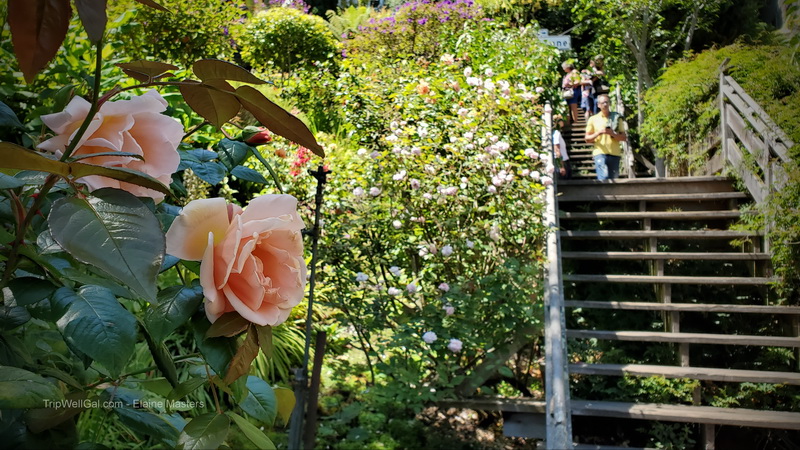 A Rose in the Grace Marchant Garden on the Filbert Stairs

The Filbert steps weren’t always as beautiful as they are today. Open spaces along the stairs became garbage dumps. Actress Grace Marchant moved into a house on the hill during the Depression years and began cleaning up the area foot by foot. Until the 1970’s she and her daughter tended the garden. In 1989 a neighbor discovered that Grace had planted on their property lines but before they could tear out the gardens out a new community group formed and raised funds to purchase the disputed land. Their activism has preserved the green space. ‘Friends of the Garden’ continues to nurture the flowers and trees for all to enjoy. 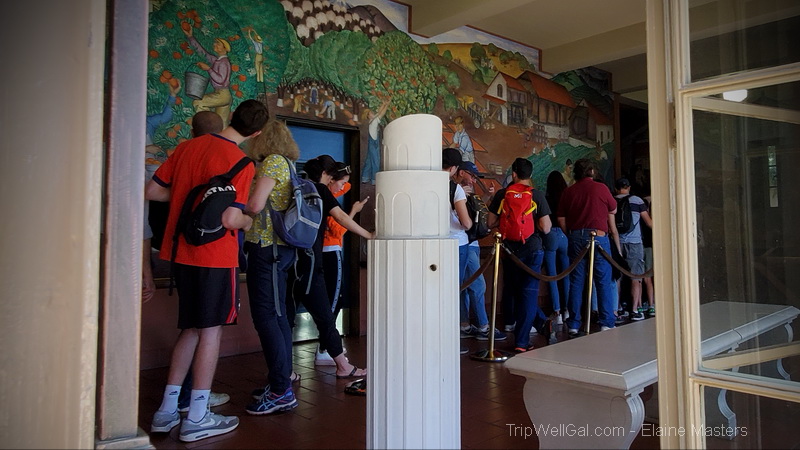 A glimpse of the Coit Tower Murals

I loved walking up the stairs and between homes. There were so many personal touches. One resident took a twisted branch and fashioned it into part of his fence. A sweet, older man who was carrying large shopping bags answered my questions about getting groceries into his home on the walkway. He uses his car for the biggest deliveries and parks behind the homes but enjoys taking the steps. “It keeps me going,” he said smiling as he passed.

You might think that residents would be concerned about earthquakes but fire is actually the most threatening. Given San Francisco’s tragic history with fires, I was happy to see that the SF Fire Department found a way to get a fire hydrant on the steep hill. Most tourists are respectful of the resident’s privacy and careful about leaving garbage on the stairs. There’s signs pointing to big bins along the way. 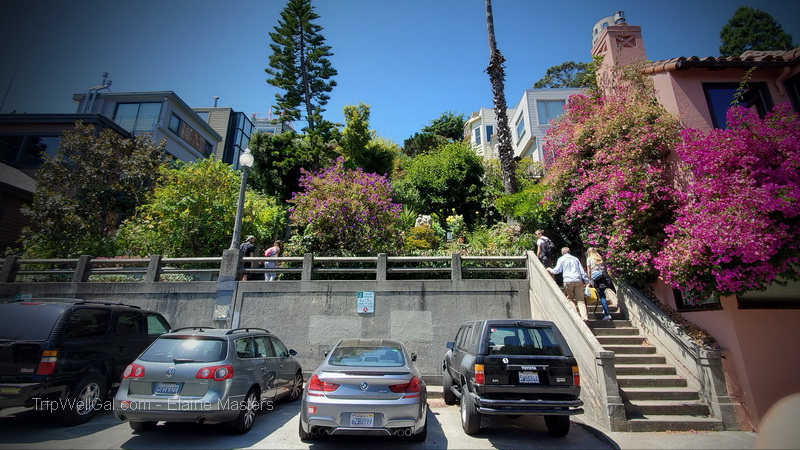 Socialite and patron of the San Francisco Fire Department, Lillie Hitchcock Coit, left a third of her legacy for the “beautification of the city.” The tower fulfilled her wishes. It was designed by the same architect, Arthur Brown Jr., who created the city’s palatial City Hall.

One of film director, Alfred Hitchcock’s most famous films, Vertigo, used San Francisco as a backdrop. The director was not related to Lillie but made sure that Coit Tower was seen clearly through the window of his hero’s San Francisco apartment (a trick as the scene was shot on a Hollywood lot.) Hitchcock’s reasoning when asked? “Coit Tower is a phallic symbol.” Perhaps it was for Alfred but I see an impressive architectural and Art Deco masterpiece. 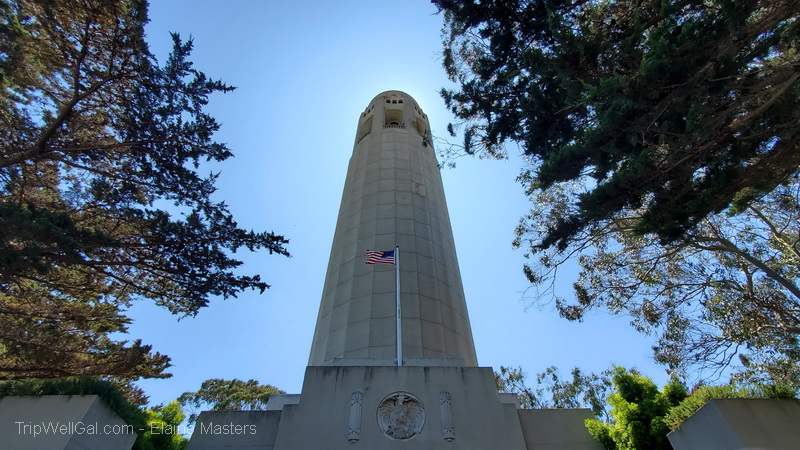 Coit Tower is a remarkable landmark. It’s no longer the tallest building in the city, but it’s location makes it one of the most recognizable. The hilltop was prized for its beauty as far back as 1896 when local businessmen donated profits to preserve the open space and created Pioneer Park. Today the Park wraps around the hilltop and Coit Tower rises in alabaster beauty from a hem of green.

The Tower is gorgeous inside as well. You need a ticket to take the elevator to the top but if you go by stair you’ll find the curved walls adorned in storytelling murals. Beautified as part of a New Deal art project, it took 25 painters and 19 assistants to complete. Today the themes are noted for their historical significance but when first unveiled many thought the depictions of a robber, department store, and life on the wharf were too left-leaning. Lucky for us they survived the ‘controversy.’

There’s lots more to see and do and taste in the Coit Tower Stairs area.

A few notes from the top of the Coit Tower Stairs

This post contains Affiliate links which help to keep this blog afloat and are offered information-ally at no cost to you.

Share what you’ve discovered climbing around San Francisco and these Pins! 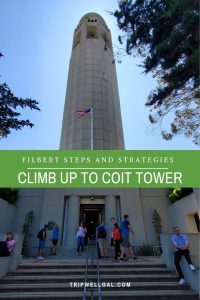 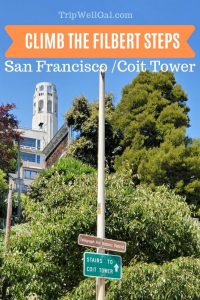 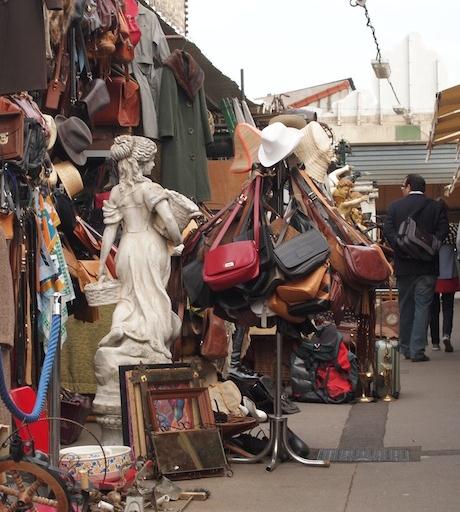 Paris, the pick-pocket and how to avoid identity theft