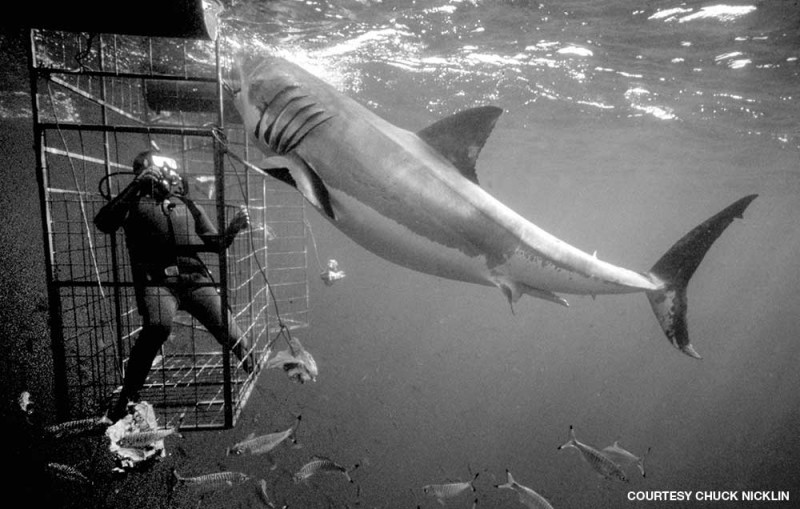 The boat bucked in a white capped sea while rain blew in at a slant. This wasn’t the tropical experience of scuba diving that I’d imagined. When the dive master finished his briefing and announced, “Pool’s open,” I flopped heavily over to the back of the boat and stepped off. It was the easiest part about scuba diving with Chuck Nicklin.

“Warm, too warm” was my first thought! After diving in chilly San Diego waters, it was a shock to sink deep into a steady 80+ degrees all the way to the bottom.

That impression faded as I descended, surrendering to a circus of color and shape floating in an expansive blue. A sigh slipped out with my bubbles. “Just perfect”, I realized. 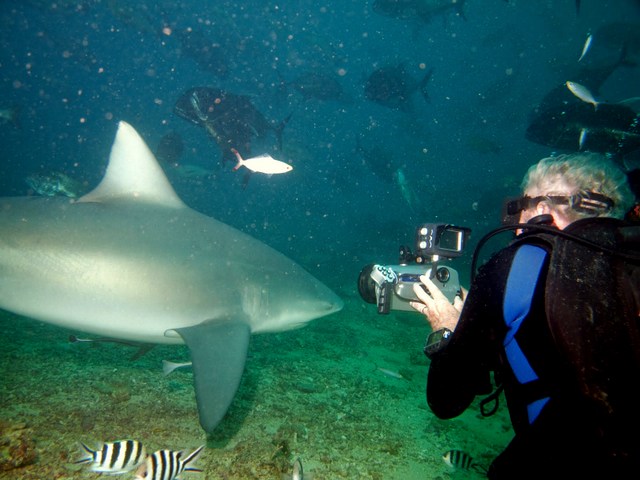 It had taken months to get there. Chuck Nicklin, renowned, innovative, underwater videographer organized the trip with his wife, Roz. Several friends from San Diego Underwater Photo and Video groups signed up immediately. Although I’m not really a photographer, I tagged along, determined to celebrate my 50th dive in tropical waters.

Over coffee a few weeks before leaving, I coaxed Chuck into sharing some of his decades of film and dive experiences. He’s worked with James Cameron on the Abyss, on several Bond films with Sean Connery, Jacqueline Bissett and Kim Bassinger, to name a few. It was his determination to make scuba diving film-work legit that pulled him away from owning his San Diego shop, The Dive Locker.

Good fortune and a taste for adventure led to international assignments, including a contract with National Geographic. He’s inspired legions of divers to pick up their first underwater cameras and his son, Flip, is an accomplished underwater documentary filmmaker and author.

Over the 10 days of the Fiji trip, I realized that it didn’t matter where Chuck was – sharing a story over the local curry, enjoying the beach sunset, or exclaiming underwater as Bull Sharks scooted close to his lens – his unflappable joy was always contagious.

Chuck and Roz love to travel. Listening to their itineraries, I wondered how they do it. As rumors of new dive destinations around the world surface, they explore them and then often organize small groups to join in. There’s a score of trips at ChuckNicklin.com. This Fiji adventure was his fifth (and self proclaimed ‘last’) journey to Beqa.

Scuba diving with sharks in Fiji 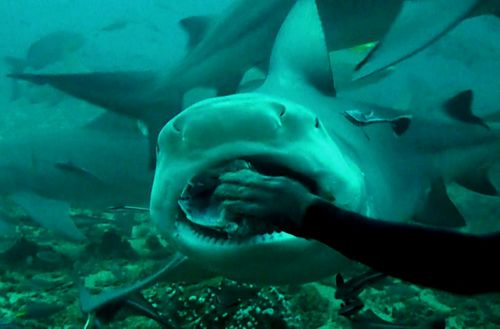 Our last dives were with Sharks and organized by Aqua Trek, with permission of the local Fijian chiefs. All dives off Beqa island are permitted by native tribes as the waters belong to them as much as the land. It seems to be preserving a delicate balance, which can’t be said for other coastal communities.

I had coaxed myself into this dive thinking of the hundreds who’ve preceded me – no cage, in the water, where some of the top ocean predators are freely swimming close. In the more than 11 years of the Shark dives there’s no record that anyone’s been hurt. It’s a testament to the human respect for these immense and intelligent creatures.

Our small boat met up with two others, one with divers from Suva and the chumming boat. While we finished our briefing and detailed safety procedures, I was shocked to watch the dive masters throw handfuls of fish heads into the water.

Snapping jaws broke the surface. What was I doing?!

The sea was rough and we were instructed to hold a line extending from the stern, but to stay away from the other boats. That alone had my adrenaline spiking, plus knowing my legs were dangling just a few feet from the earlier feeding frenzy. But dive I did and it was absolutely astounding. We were told that there would be two short dives at about 83 and 65 foot depths. On the first we held a rope at the bottom and our wall of bubbles was supposed to ward off the sharks. It barely did.

Once the bin full of chum was opened, the water churned with hundreds of small and medium fish. Bull, Nurse, giant Lemon, White and Black tip Sharks curled in and out of my vision. It was mesmerizing. A phalanx of safety divers floated at our backs with long poles, which they used to push away the closer sharks. I watched in perverse fascination as the Sharks came closer and the chumming divers actually began hand feeding them while wearing chain mail gloves.

Soon we were signaled to swim to our safety stop – another rope suspended from the boats. My heart leaped as I watched the large predators swirling beneath us and scooting close, still hunting for hand-outs. A chorus line of Remoras sucked the hull of a wreck a few feet away. Within minutes it was time to surface and calm down before the second round. 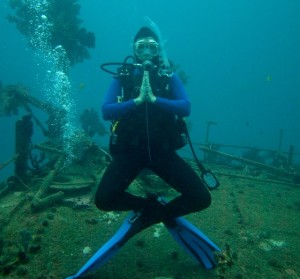 Back in for more diving with sharks

We panted and chattered during the interval, munching on pumpkin bread and gulping sweet juice. Exhilaration overrode my anxiety and everyone wondered if we’d see a Tiger Shark on the next foray. Finally it was time to file back into the water, descending to about 65 feet. I set up in front of the tub and waited. Suddenly I could hear Chuck shouting through his mask. An enormous Tiger swam in right over my head, impervious to the bubble wall. Her size was thrilling and her markings, flanks decorated with stripes, were gorgeous. I couldn’t help but scream when she safely wrested a huge chunk of fish from the hands of one diver. She circled a few times, ate more and disappeared suddenly.

Chuck chattered and marveled with all of us on the return trip to the island. Again I wondered how he and Roz do it? What if one of them was hurt? What about my friends, who’ve brought their children along? But once you’ve mastered your fear, realizing that Hollywood has done more to stir it than an actual encounter with Sharks, it’s a priceless experience. As my dive buddy reminds me:

More people are killed by falling coconuts than sharks worldwide!

Chuck Nicklin’s filmed many shark dives but this was his first where the elusive Tiger made an appearance. It was unforgettable. I hope to go scuba diving with Chuck Nicklin again and when I’m in my eighties match his passion for adventure!

Pictures courtesy of Chuck Nicklin.com and Cindy Lipathay. This is an original post from 2013 but updated to share Chuck’s new book release.


You can purchase it on Amazon.com 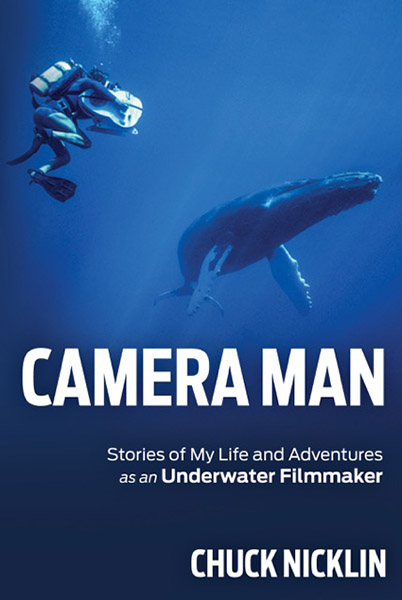 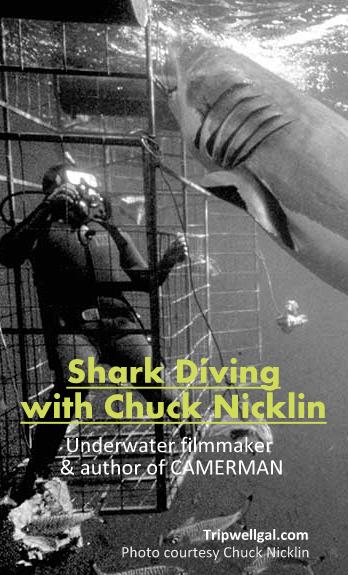 Following these weekly linkups. Lots of other great travel stories to explore:

Free diving for wild Abalone on the Mendocino coast

Celebrating Baja Wine and Food – A day in the Valle