Heartsleeves Coffee owner Brandy finishing one of her signature brews.

I thought drinking coffee was a caffeine delivery system and a delicious ritual. How wrong I was. My education began four years ago during a Caffeine Crawl and I just attended the fifth San Diego tour. I wasn’t jonesing for more nervous energy (I enjoy a morning brew and that’s plenty) but it sounded fun and interesting. The 2014 tour was a first for San Diego and organized by The Lab in Kansas City. Founder, Jason Burton, has led 65 events searching for the best coffee in cities across the country and the number would be higher but he took a little time off for the birth of his daughter.
.
I was lucky to get in with ticket Number 84 – by Saturday, the tours were sold-out. No doubt the time was ripe for non-coffee-industry locals interested in knowing more, seeing more, and tasting in new places. 2014 -InterAmerican Coffee Importers at the beginning of the first San Diego Caffeine Crawl.

My ticket was a back-stage pass to coffee roasters and we met first in the corporate offices of InterAmerican Coffee, specialty green coffee distributors. Each of the four groups had a different itinerary of four or five stops over three hours. Some of the tours were walk-able, bike-able, or self-driving and everyone had a map.
.
Before the morning was out, I’d glimpsed the culture behind the best coffee and realized how many dedicated roasters and ‘coffee nerds,’ (as Mondo of Swell Coffee Roasters self-identifies,) there are in San Diego. Was I converted to giving up my corporate cups and drive through, membership privileges around town? Had I gone over to the dark (roasted) side? First, grab a cuppa java and read on about the history behind this enticing brew. Where the best coffee started

According to legend, in ancient times an Ethiopian Shepard noticed how frisky his lambs got after eating the beans of a certain hillside bush. True? Perhaps, but if his sheep started acting up I’m surprised that the beans got off that hill. By the 1500’s, coffee was being served in cafes around the Middle East and then was banned by Islamic law, which claimed that the intoxicant that led to illicit sex. That rule was overturned quickly. In Turkey coffee became so popular that, “lack of sufficient coffee provided grounds for a woman to seek a divorce!”
.
In the 1600’s a headline in Great Britain claimed that the best coffee could cure alcoholism. The cure was a more likely a reflection of the times when drinking water was dangerous. It was common for children to adults imbibe distilled ales and beer, from morning to night. By 1730, Tea was more popular in London but in the colonies, Tea Party Revolutionaries threw that trend in the drink.

Most thought that the brew helped you work longer but there were still concerns. In 1916, Good Housekeeping magazine sounded an alarm that coffee stunts growth. At that time many were suffering already from insomnia, indigestion, nervousness and heart palpitations – coffee didn’t help. By the 1920’s coffee reports claimed that it would give you bad grades. Try telling that to today’s college students!
.

By 2000 there was a new study about the health benefits or risks from drinking coffee. Accordingly, the best coffee complicated urinary tract cancer, lung disease, stroke and prostate cancer, even leading to heart failure. In 2017 over half a million people in ten European countries participated in an exhaustive study. The results included claims that drinking coffee could significantly reduce the risk of death and the impact didn’t depend on how it was prepared or consumed. Drinking four cups or more a day increases the risks of fractures in women and pregnant women are cautioned to be wary. (Thanks to the CNN Report on Coffee History) After more than a dozen years working in hometown coffee shops, I discovered several new shops. Here’s a map of all the spots covered on the San Diego 2018 Caffeine Crawl Tour. I attended the last tour of the weekend in 2018.

.
My 2018 Caffeine Crawl began at the Bird Rock Coffee Roaster’s location in Little Italy. Owner, Marita worked in the tasting business for 19 years with the Columbia Coffee Corporation when she met Jeff from Kansas City at an industry event in Ecuador. Dedicated to locating, supporting and serving only the best coffee, today the family serves “coffees that you might not experience anywhere else.” The family behind Bird Rock Roasters in San Diego

While drinking some of the best coffee from South America, I learned about the Origin Effect. A coffee belt runs around the Equator. With no frost, the sun hits plants evenly as the planet rotates. It also rises and sets at the same time each day year round. This leads to a consistent flavor but takes more time to ripen. The best coffee beans are picked by hand for sweetness, acidity, and flavor. Set in a small Little Italy alley, Heartsleeves Coffee serves a different kind of buzz in the percolating and popular neighborhood. The owner, Brandy, worked in a risk management business but changed careers because, “Coffee makes people happy.” “You don’t go to school for coffee, ” says Jason, who was a graphic designer, among other positions, before founding The Lab and beginning the Caffeine Crawl Tours. Here’s a recipe for the drink Brandy served our group:
.
The Dirty White Rabbit: .
Oat milk launched recently and the coffee creamer, dairy-alternative is worth tasting. Jason recommends it for the long shelf life as a non-cow alternative and says the chocolate version is ‘amazing.’ The Oat Milk company is active in the coffee community, training baristas to work with Oatly. .
Now I know where to find local roasters under one roof. Point Loma Coffee searches for local roasters and is dedicated to keeping it interesting, rotating amongst the brewers and brewing methods. “You don’t have to go all around town or the county to get whole beans.” They look for something new and different and use different brewing styles to show the flavors off; classic, drip, pour overs, espresso, and cold brews are included. A coffee may taste better made one way rather than another, the manager says, “We find the best way to showcase that coffee.”

Factoid: There are 30-40 different roasters in San Diego. Bicycling parts and memorabilia in the Coffee Hub

Family owned by bicyclists and bakers, the comfy Coffee Hub is set into a modest shopping strip on Shelter Island. The “coffee bar and café, with a cycling theme” is family owned and serves locally roasted coffee, breakfast, and lunch. Their family-recipe biscuits are incredible. Laid back, with an inviting patio, the Swell Coffee location in Mission Beach is a sun, sand and caffeine lovers dream. Our group met Mondo, one of the owners, who treated us to samples of their cold brew and then went into a delicate ritual using top of the line products to create a few cups of the best coffee.

Stainless steel and calibrated, the Decemberist filter is a technical work of art. Mondo heated water to an exact temperature, then poured it in very slowly to wake up the beans. He used a specialized funnel, pitcher, a blue-tooth enabled scale and it took about 5 to 10 minutes to complete the process. The $500 set-up was more than most casual drinkers would invest in. Curious? If you’re in the neighborhood and Swell isn’t too crowded, ask for a Decemberist filter (not on the menu.) I’ve gone over to the dark roasted side, proudly, and look forward to the 2019 San Diego Caffeine Crawl with Jason. New cities and dates are being added almost weekly. Check out the website to see if there’s one in your city.
. 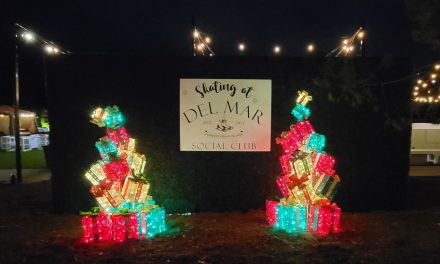 Holidays Spirits and Light Shows for Grown-Ups In San Diego