“We travel, some of us forever, to seek other states, other lives, other souls.”

Caption: Jordan was one of my new places in 2017 and these are just a few of the kind strangers I met there.

.
Have you ever traveled to a new city, state, country where you know no one? Visiting new places can be daunting but you may also feel a bit courageous. It’s exciting but a bit scary. It’s harder to find the grace and opportunities between those extremes if you stay tucked away in the familiar. Whether it’s heading to a new area near my home or I’m far away, in new places my senses are on alert and I feel more alive than ever.
.
“Travel makes one modest. You see what a tiny place you occupy in the world.” ― Gustave Flaubert
.
Traveling to new places is humbling too. ” I have always depended on the kindness of strangers,” says a famous Tennessee Williams character. It’s a complex play, but if the tragic Blanche Dubois had truly opened to a new way of living, to being fully present, A Streetcar Named Desire may have had a happier ending.

Learning to depend on the kindness of strangers – or not

.
Those of us who are fiercely independent may find it hard to ask for help. Travel has taught me to get more comfortable with asking for what I need and it’s taught me the consequences of not doing so. Human nature is basically kind I’ve found, and asking for assistance can be chance to connect, it can illuminate cultural differences or lead to bonding over a common issue. By example, the simple task of getting directions might lead to discovering much more and as a writer, I’ve found a few great stories that way.
.
I won’t forget falling on a sidewalk in Puerto Ayoura in the Galapagos. I hadn’t seen several bolts protruding out of the cement. As I fell to the hard surface, scraping a knee and bruising my hip, I looked up and for a few seconds it seemed that everyone on the street stopped, turned, and then started walking my way to help. I quickly assessed the damage and my hand shot up, “I’m OK. Thanks.” They turned away as I drew myself to my feet, but what if I’d allowed myself to be comforted? Stumbling around, back in my bubble of independence and sore for the next few days, made me wonder.

Caption: Three humbling experiences of the kindness of strangers: Top – Rome on my first night. The owners of the Bukowski Bar were very kind and explained their local happy hour customs. A flight attendant tried to entertain a crying baby during my 11 hour flight to Taipei. By myself in Milwaukee’s Harley Davidson Museum, two writers invited me to tag along for the night.

“A person needs at intervals to separate himself from family and companions and go to new places. He must go without his familiars in order to be open to influences, to change.”

Opening your heart to the new can be difficult but it’s part of growing – if we let it. I grew up in the suburbs of Southern California, sheltered in a ‘bedroom city’ as my mother called it. My neighborhood at the base of Mt. Baldy was bordered by orange and lemon groves. Exploring those dark, cool rows of trees felt dangerous but my band of friends and siblings would play there often. We’d climb the branches and toughen the soles of our feet by running through rough fields and over scorching rocks. Those first forays into independence and risk set me up for later, far-flung adventures.

Road trips were a big part of growing up too. Most summers, my parents would pack the station wagon for long weeks of wandering. The people we met and new places we explored opened my eyes to a wider world. I’d stepped foot in nearly every state by the time I left for college in Northern California.
.

Caption: Top – Guide in Split, Cousin in Zagreb, Ship Captain and Chef prepping dinner
.
The people we meet often change our lives. They may be lovers, friends, or relatives who entice us to live in different places. After college, I ended up working in Southeast Alaska for six years before eventually returning to the Southern end of the Pacific Coast. There were backpacking weekends, long train trips, ferry journeys, camping, and lots of drives in between. I also learned, on a long sabbatical, that the hardest thing about traveling the world is often setting the trip up. For decades now, I finally relax once I’m on the way, the airplane takes off, or the train leaves the station.

“Why do you go away? So that you can come back. So that you can see the place you came from with new eyes and extra colors. And the people there see you differently, too. Coming back to where you started is not the same as never leaving.” My host at the Interfaith Hostel in New York city.

As I write this year is still fresh and new excursions are in the works. I feel differently about travel now, wanting to go deeper, more consciously, and to be more present. I’m so fortunate that my work involves travel and as I witness the world, I look forward to connecting with those I meet more fully. Hopefully, in theses new places, I’ll be experienced as a kind stranger as well. One of the Red Nose murals in Rome.

“What is that feeling when you’re driving away from people and they recede on the plain till you see their specks dispersing? – it’s the too-huge world vaulting us, and it’s good-bye. But we lean forward to the next crazy venture beneath the skies.”

― Jack Kerouac, On the Road

.
Wherever you’re going next, here are some tips about getting there stress free.
.
What new places are you planning to see? Riding to the Top of Europe – Switzerland’s Jungfrau

Want to Escape the Summer Heat? 5 Places You Should See 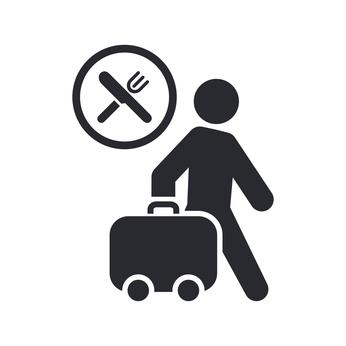 Farewell Sydney and the urban joys of Darling Harbor