On the Waterfront- Walking San Francisco Sometimes it’s easy to be so focused and purposeful that you miss the treasures around you. I keep rediscovering that as I travel for work. Recently while in San Francisco for a conference, I was staying at a hotel downtown, and spending long days sitting in meetings and networking. Yoga in the hotel room only went so far. My body was aching for air and space. Walking San Francisco seemed like a perfect idea. When the weather cooperates, San Francisco is a beautiful city for strolling. Between architecture, window displays, cafes and parks, each of the neighborhoods offers rewards for walkers. On that morning foray, I headed uphill from Union Square to get my muscles warmed up. At California Street, I waited for a cable car to cross the intersection.

There was a kiosk at the corner, and I wondered what purpose it served. At 6:45am, a man held court in the small space. Robert’s job was to oversee triggering the mechanism that lifted the cable where the two lines crossed, one going along California Street and the other along Powell from Market to the Marina. “Yes, he said, “Each time the Cable Cars approach the intersection I make sure the lines are aligned.” His job seems quaint in this digital age but is a testament to the city’s dedication to keeping the cable car experience intact.

At the top of Nob Hill is a collection of grand Victorian mansions and luxurious hotels. There’s a small park, and a small group was practicing Tai Chi in reverential slow motion. Grace Cathedral was just starting to bask in the sun as it rose over the East Bay hills. I kept moving, giving my knees a workout as I descended the steep steps back towards my hotel.

The second morning I decided to take one of the Market Street trolleys down to the Embarcadero. The Ferry Building stood in shadow as I started walking towards the Bay Bridge. I wanted to feel what it would be like to stand under the immense girders. Looking up at the Bay Bridge. Photo: Elaine J. Masters

The city was waking up in spurts. Small groups of joggers slid past. It was Sunday, and street artisans were setting up tables in the Justin Herman Plaza. Few other strollers shared the sidewalk. I grabbed a cup of coffee and a croissant at a cafe just after a shop girl placed her placard on the sidewalk. My original intention was to take the trolley back up to the hotel. Fueled and with time on my side, I swiftly crossed the financial district instead, passing designer shops and darkened restaurants. People started emerging into the day just as I entered my lobby with a healthy sense of accomplishment and time to spare before the first meeting started. Walking San Francisco made my day.

Have you ever gotten up early to take a walk on a business or vacation trip?

This post is part of the Hipmunk City Love Project. 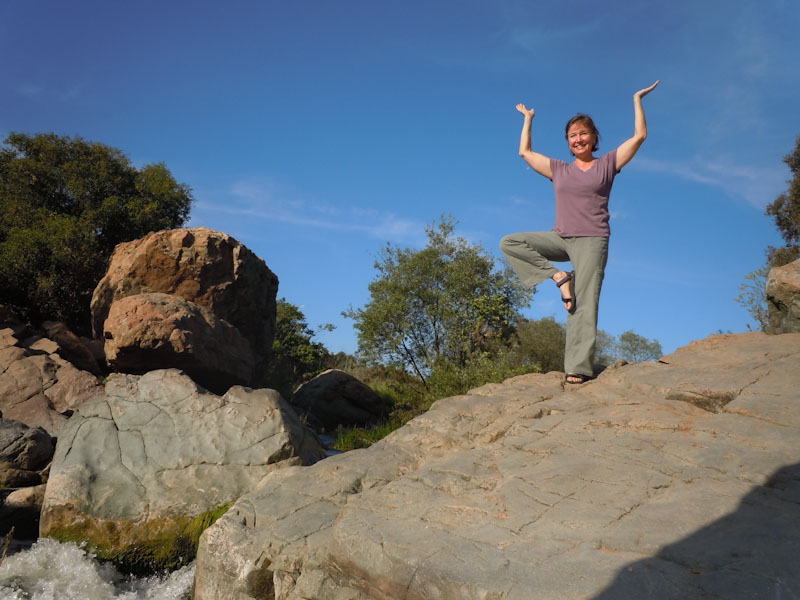 Your neck will thank you – Znzi Travel Pillow