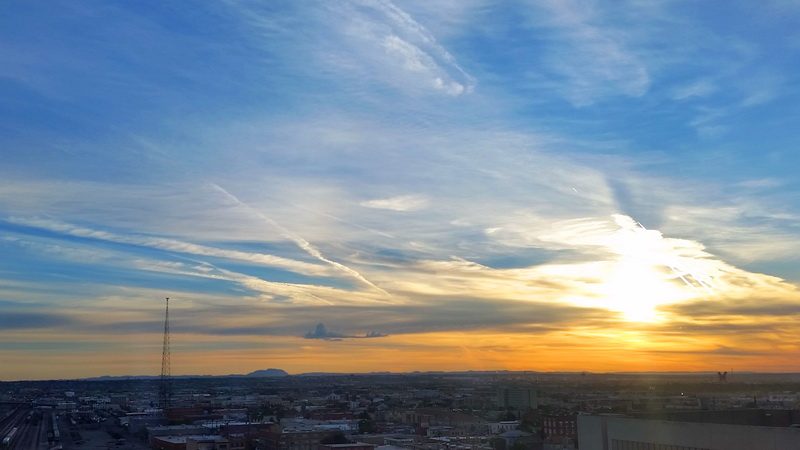 “I can’t wait to get back to El Paso,” said the young man sitting in the next seat. He was flying back alone from a long weekend in California with his girlfriend. They’d spent time on beaches, played at Disneyland and relished fish tacos. Still home was calling, ‘There’s so much to do in El Paso,’ he said as we parted at the airport. He was telling the truth.
.
El Paso is a city on the verge. It’s not just the edge of the country, a short bridge span over the Rio Grande from Mexico, but it’s poised for glory. There’s an energy in the city that grabs you. The surprises include: a burgeoning craft beer scene, murals, a hillside of Bhutanese architecture, bike and running trails over mountains less than half an hour from downtown, a wine trail and vast green swaths of desert at the end of the monsoon season. The historical architecture downtown hosts bold lobbies by noted architects and retro, neon signs that still look new. Over three days I walked and drove, shopped and ate, drank and marveled from East to West. There’s still so much to see when you visit El Paso.
.
Downtown was the biggest surprise. Before I checked into my room at the sleek Hotel Indigo, rooftop lights caught my eye.
Less than two blocks away an expansive neon sign shone. Electricity, spelt out in tall glowing letters, sits on the top of the historic Martin Building. It’s an adaptation of the original neon work from the 1940’s and one example of the revitalization going on. Originally it spelt out: Use Electricity. 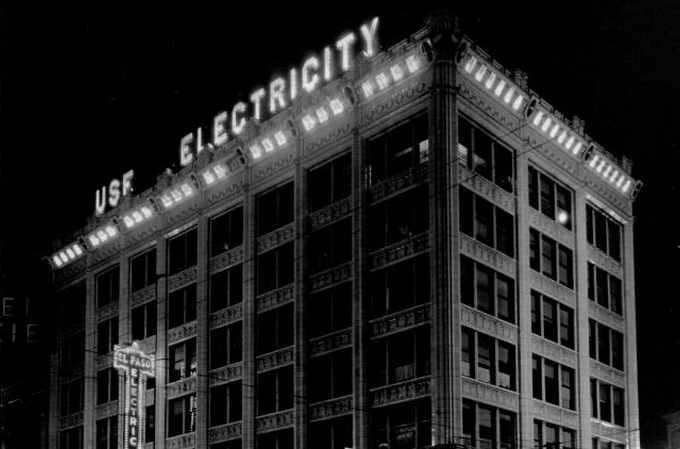 Today the sign shines proudly from dusk to dawn. Local businessman, Lane Gaddy, is behind the renovation of the sign, and the building it tops, with a small group of local entrepreneurs.

The Martin building has great bones and Gaddy’s turned it into a residential, commercial and retail blend, keeping the best features. He admits, “I love the juxtaposition of historic and old (features) contrasting with future and modern elements.” The Martin is filling up with downtown dwellers taking advantage of the great restaurants, theaters, shopping and services within walking distance of work. While his determination is taking time and persistence there’s still much to savor now downtown. 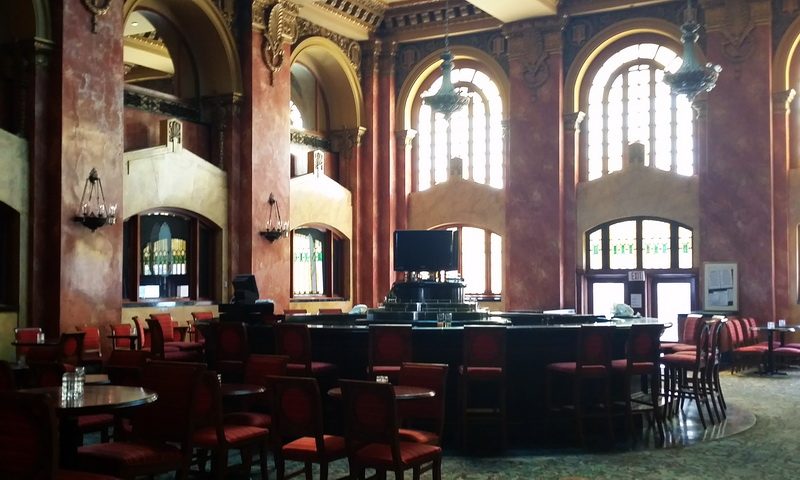 Step into the El Camino Real Hotel, under arches created in an expansion from the 1970’s and you might miss the best features entirely. Walk past the stucco add-on and into a room overflowing with embellishments from the early Industrial Age. The original “Million Dollar” lobby, named for its pink marble and gold leaf, was supplanted and turned into the Dome Bar. Over a circular bar that rises in the center of the room, a giant dome refracts shifting light through petals of glass in faceted jewel tones. It rivals the sister Tiffany dome in Chicago and has been authenticated by the Library of Congress. 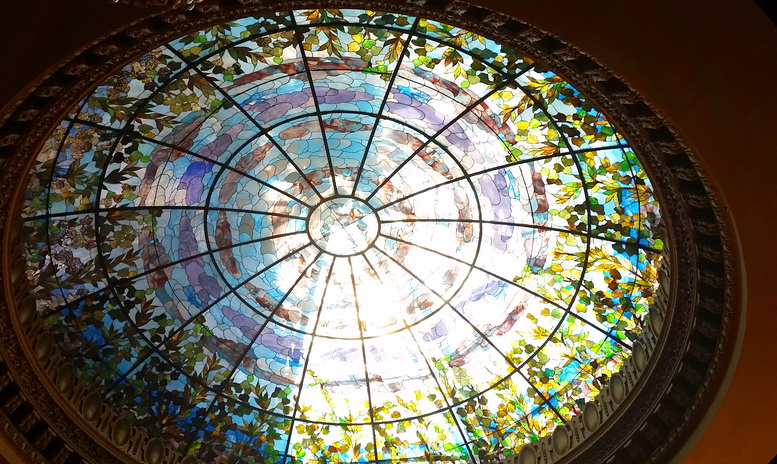 When the Camino Real Hotel was new guests could tip bell men and watch the Mexican American War raging across the border fron the rooftop. North American imperialism finally won and over time a wide bridge was built to bring commerce and workers between Juarez and El Paso. Tourists would shop and eat in the Mexican plazas. Goods moved freely. It all shifted, of course, when 9/11 brought border closures and then rival cartels began their reign of terror. Today things have calmed and  business men like Lane Gaddy still move back and forth across the border daily. Gaddy sees glimmers that tourism is returning too. I was tempted to set up a day tour but there was so much more to see and my time to visit El Paso was short. 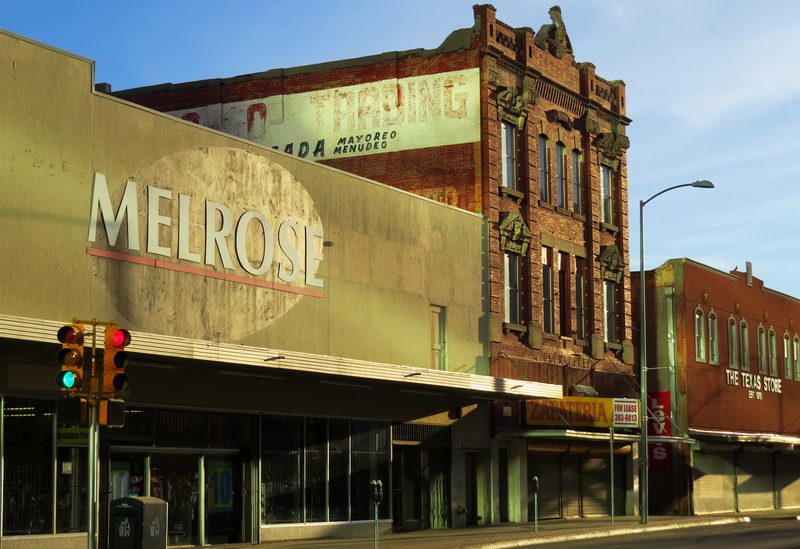 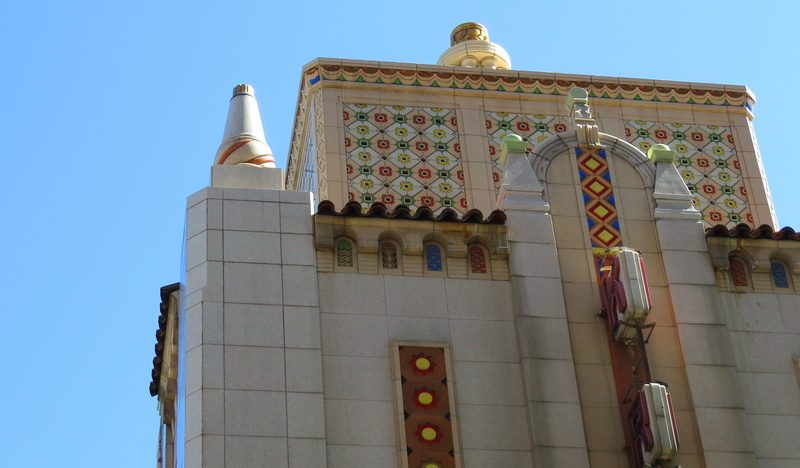 Top of the Kress Building in downtown El Paso

One evening just before dusk my sister and I grabbed our cameras and took to the streets. Downtown architecture and vintage signage had me curious. We found a large Kress store facade looming next to one of the first independent Hilton ‘sky scrapers.’ It’s currently under contract with the Hilton Corporation for renovation into a multi-use facility. The days of architect Henry Troost are visible all around the main, San Jacinto Square. 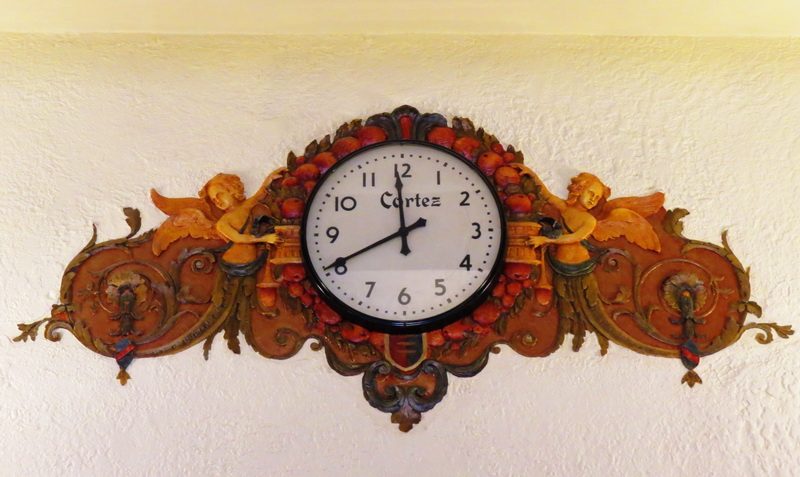 Henry Trost designed the elements inside the Hotel Cortez

My favorite find? The Cortez Building. Stepping inside was a time traveling trip. So many details remain and still look new. There were alcoves in the main lobby set with vintage furniture and the elevator exterior was a wonder of artful tile work, brass and sconces.
Nearby the Plaza Theater has been completely renovated and I can’t recommend a tour or attending an event in the vintage performance palace enough.
.
A few blocks away the new baseball stadium is open on one side. A wrought iron gate stands between the field and street, where, as part of a compassionate civic mandate, those who can’t afford tickets can watch a game. It’s a short walk from the Chavez Theater, built to resemble a sombrero and the adjacent convention center. 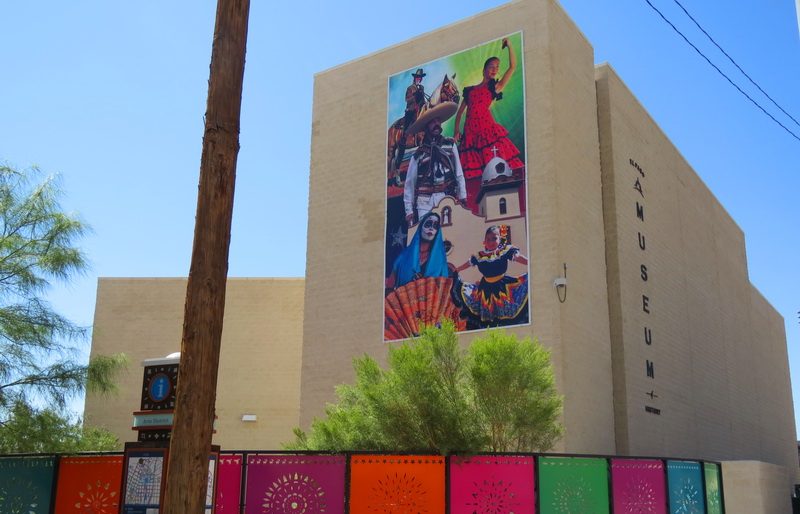 Just north of the stadium, the Museum of History looms. It’s no stuffy showcase. Visitors first walk past the Digital Wall where, with a finger tip, they can touch a lengthy collage and open up notes from photographers, historians, culinary experts and artists. The vast art museum sits next to the Plaza theater filled with Texas creative works and rotating exhibits from both sides of the border.
.
The Rio Grande River marks the area still. Just outside of downtown since the 1990’s, Heritage Gardens volunteers have been working to preserve wetlands and native vegetation in a graceful park laced with trails featuring sculptures, ponds, and rock walls set with a gallery of mosaic murals. There are play areas and picnic tables, benches to sit and ponder upon, plus a raised platform over tidal pools that fill with migrating ducks and wildlife.
Looming over El Paso is the Franklin Mountain range. It’s inside the city limits! When you visit El Paso you must head for the hills. The mountains above town offer a network of trails and roads and it’s close. The Wyler Mountain Tramway winds up the east side and from the west, the Franklin Mountains State Park is a wildlife refuge. Outdoor experts like Don Baumgartner, founder of Geo Betty Tours, leads groups and bike rides. Climbers are fond of granite outcroppings. When you visit, bring plenty of water and snacks, better yet plan a picnic in one of the many shaded seating areas and scan the hills for goats and other wildlife. 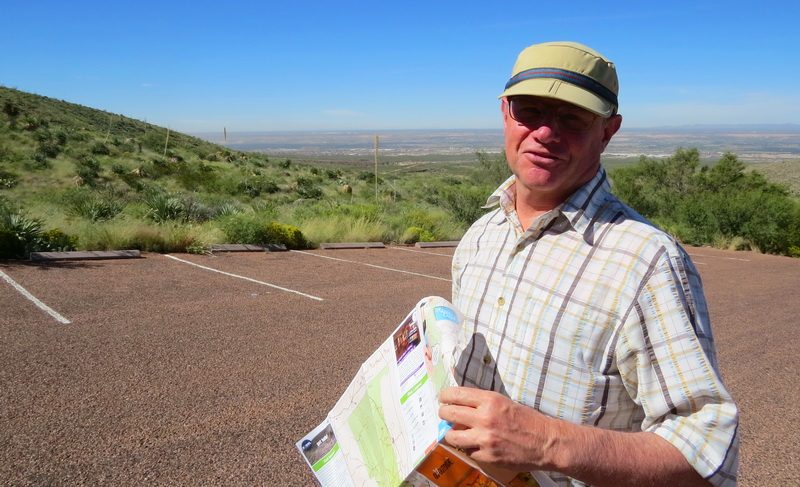 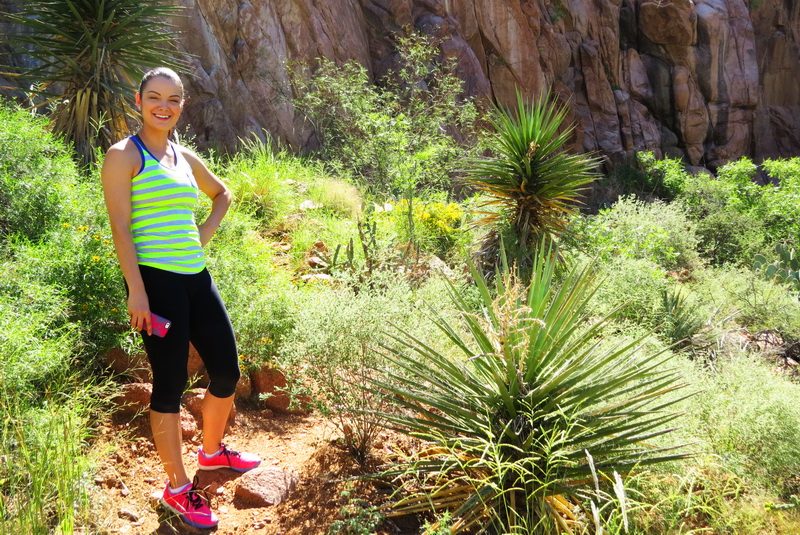 Once the trolley is back in service it’ll be easier to move from downtown to the University District Entertainment Center. The campus stands out from a distance as most of the buildings were built on dimensions from Bhutanese temples. Founded in 1914 the Texas State School of Mines and Metallurgy took its inspiration from Kathleen Worrell, wife of the first dean. She was fascinated with a National Geographic magazine photo-essay about the ancient kingdom and convinced her husband that the new campus be built in the same style. 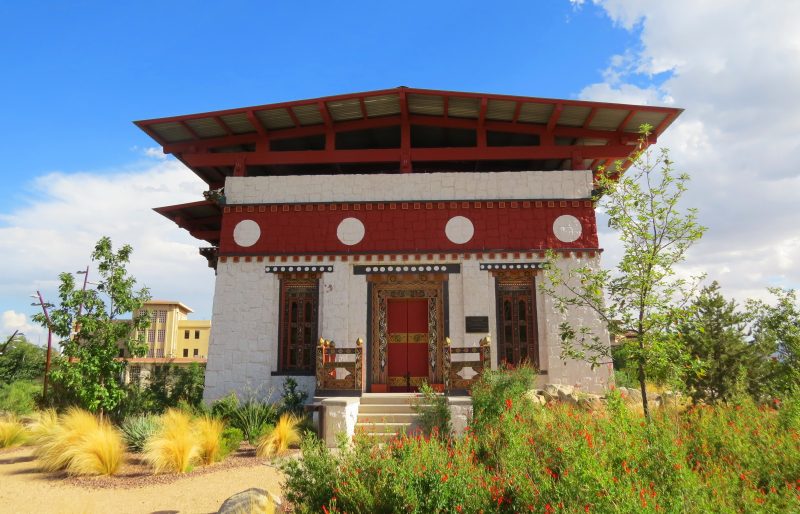 Bhutanese Temple in the center of University of Texas El Paso

The homage is more than skin deep as many Bhutanese artifacts are housed there. The University sponsors bi-annual Bhutan Days and enrolls a growing number of Bhutanese students each year. In the center of campus sits an authentic Bhutanese Ihakhang, house of god, but it’s not there as a working temple. Made with no nails or modern machinery the building was slated for demolition after a show at the Smithsonian in Washington, D.C. I walked around it and peered in windows. The campus and the temple are things of beauty and the closest I’ll probably get to the kingdom of Bhutan. 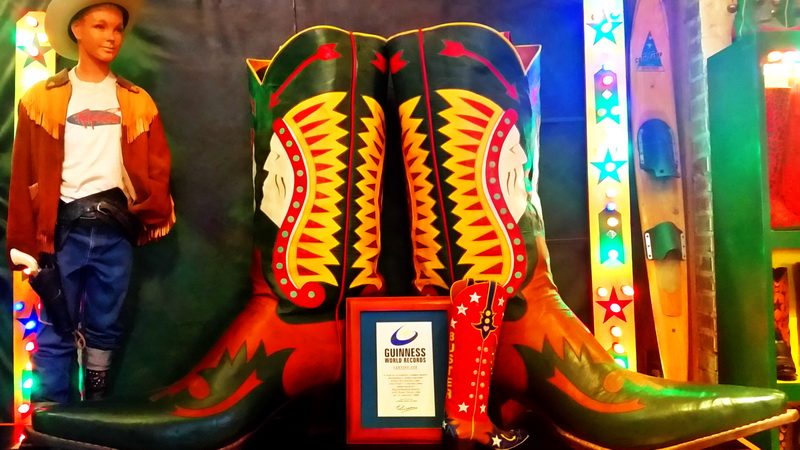 The biggest boots! Guiness World Record winners inside the Rocket Buster workshop. More about El Paso’s cowboy boot workshops in the next post!

Getting around when you visit El Paso:

From the airport: Visit the Airport Ground Transportation pages for schedules and options.
The Trolley Returns
Once El Paso and its neighbor Juarez, just across the Rio Grande River had reached a detente the two regions and countries worked together. They supplied each other with labor, jobs, shopping, restaurantes, tourism and an efficient transnational trolley line was in use before every family had a car.
Unfortunately once cars and freeways ruled, public transportation declined across the Americas. One reason for the El Paso – Juarez line’s demise is cecause it was “too successful!” A cross-border rivalry between merchants cut the service. Finally, in 1977, Mayor Ray Salazar ordered the El Paso trolley tracks removed.
If only those lines were still intact! New tracks are being laid and stations set. After retiring the line, a half dozen of the original Art Deco cars had been baking in a field near the airport.The good news is that by 2018 the historical Trolley system will be back in service with the line extended from downtown out to the University.
I’m looking forward to returning to ride and discover more when I visit El Paso again.
Next post we’ll be dipping into the craft brewery and food scene in El Paso. Subscribe and don’t miss a story!
Special thanks to Visit El Paso for making this trip possible.As always, all views are my own. 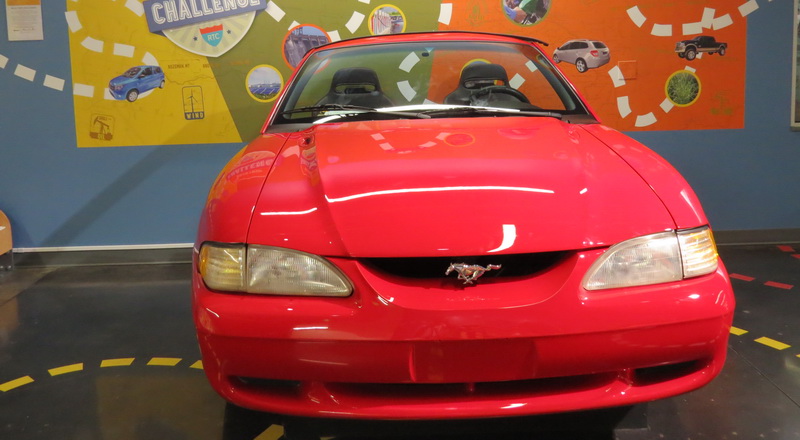