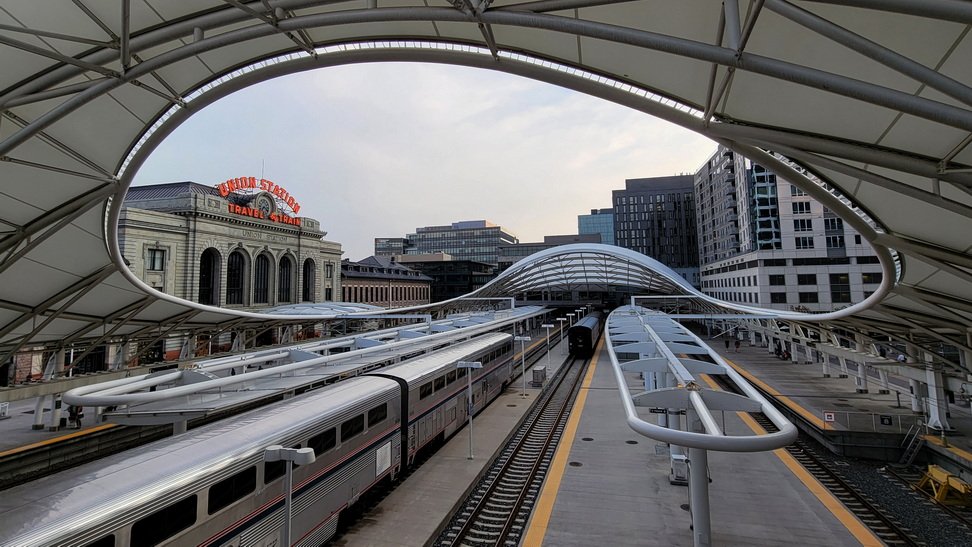 Planning a trip? Once at your destination, and given a choice between riding a train or driving, which do you choose?
I go with rail rides whenever I visit a city. They can be as simple as riding a trolley to the other side of town, traveling up the coast to see friends in Los Angeles, or exploring Kansas City for the first time.
.
As much as I love the freedom of car trips, I’d rather sit in a train car and leave the driving to the engineer. On some rides, I hook into internet service and get work done but mostly I enjoy slow travel, read, visit with other passengers, and observe the passing world from my window seat. But there are as many reasons to take day train trips as there are passengers.

Aside from walking or biking, taking the train is the most environmentally friendly way of traveling. In fact, compared to cars and airplanes, trains emit between 66 and 75 percent less carbon. In terms of energy consumption, use of space, and noise levels, trains are far more sustainable too. According to EuroRail.com

Manspreading is a no-no on crowded trains. Note the space a man is taking as opposed to the woman beside him. Photo: Wikipedia Commons

After years of riding and driving, here’s a few of my favorite rail rides around the United States. In future posts I’ll share other kinds of day train trips from specialty, commuter, curios and historic rides.
.

Click on the picture below to unlock my video of a rail ride out of Ely, Nevada. 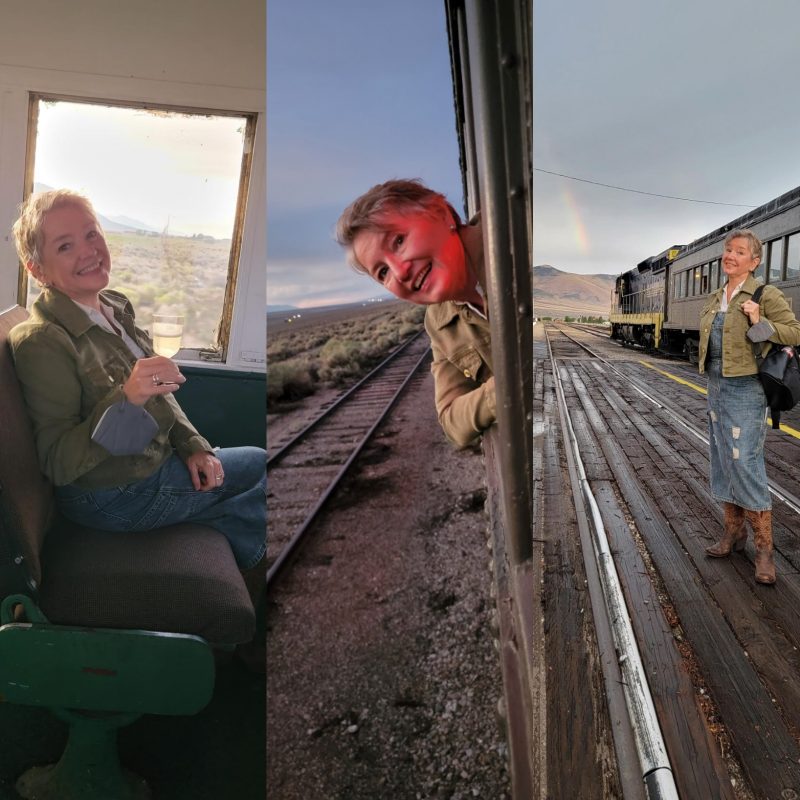 My hometown has upped its rail game with the addition of nine new stops. The MTS (Trolley System as opposed to Amtrak or Coaster trains) with color coded lines: Orange, Green and Blue. The Blue Line now runs from the San Ysidro border to UTC (University Town Center.) It’s not fast, taking an hour and 23 minutes end to end, but the ride is fun as it goes north to La Jolla crisscrossing the freeway on an elevated rails.
.

Metrolink is a boon to Southern California commuters and those of us on day train trips. The first minutes of the trip run alongside the beach with views to the horizon, through villages and then north into more industrial areas. I catch the trains in Oceanside (the southern most stop in San Diego county) and cruise north to Union Station in Los Angeles. Check for tickets online and their special fares, like deep discounts on weekends. Check for limited schedules on certain days as well. 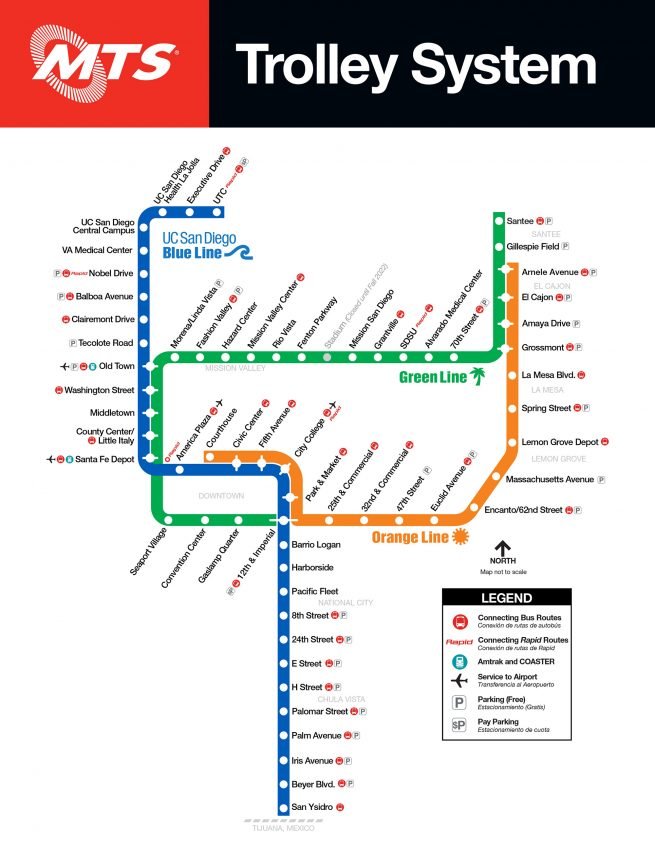 At 18 I first moved from home to attend college in San Francisco and was challenged to give up my car (it went to my younger brother.) I had to manage getting around by public transit. Over the next five years I traveled from apartments to classes, work to play across the bay area. I grew up taking street cars and buses. So, it was a joy to return recently with my younger sister and explore some of the old routes. The historic street cars still run up and down Market Street but newer cars run through tunnels throughout the city. They’re clean and efficient. Tickets are a bit more expensive than in the 1970’s of course, but day train trips fares are more affordable. You can find the information you need for streetcar rides online easily.

The historic streetcars and cable cars were out of service during the pandemic but have returned to run seven days a week from 7 am to 10 pm. If you’re determined to ride a classic cable car be prepared to wait in line and ride when the crowds thin early or later in the day. There’s nothing quite like watching the engineers work the old gears and watch the city glide by from open-air benches. It’s worthwhile at least once in your lifetime.

3. Portland, Oregon – Take the MAX Line from the airport and around the county

Portland’s done it right. In the 1980’s, the city laid tracks for the MAX Line which runs to and from the airport connecting Portland City Center with Beaverton, Clackamas, Gresham, Hillsboro, Milwaukie, and North/Northeast Portland. Today the system runs flawlessly. The cars are frequent, clean, and affordable.

I took the train from downtown to the Zoo and shuttled over to the Japanese Garden on my last trip. Getting to and from the airport was far more affordable than San Diego or New York City. I highly recommend exploring outside the usual attractions. Ride south to take the Portland Aerial Tram for fantastic views across the region and should the clouds lift, see Mount Hood in all its glory.

The Denver airport lies quite a distance from downtown but getting into the city is easy. First, there’s a wonderful park outside the airport terminal with an elevator and escalator down to the RTD rail rides. With more than fifty stations across the metropolitan area it’s easy to get around town. The fare system pricing depends on which zone you are in and how many fare zones you travel during a 3 hour trip. 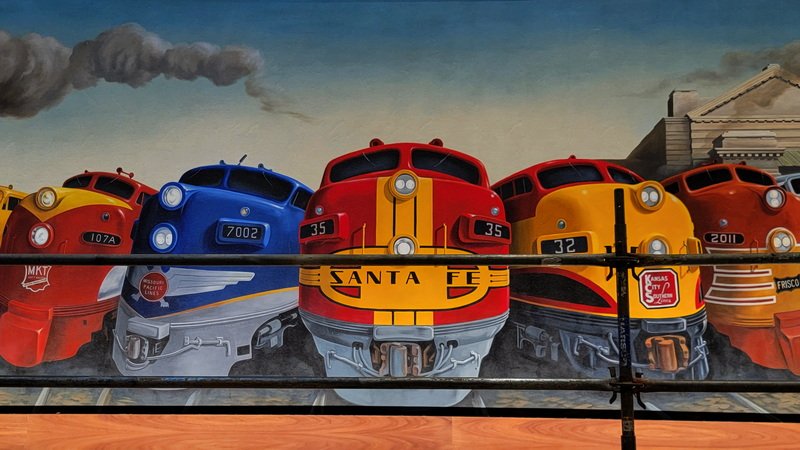 The KC Streetcars run daily and are always free. They’re an easy way to navigate the city and get into town for events. The route goes from the Farmers Market neighborhood with its shops and cafes, vendors and parks and through downtown, and all the way to the huge, historic Union Station. I loved the ride and views as the city shifted from dense office towers to clusters of homes and the market. If y0u ride on a rainy day, as I did, the streetcars are a welcome refuge.
.

While it’s been plagued with construction woes during the Big Dig, Bostonians are still blessed with a swift public transit system. I attended a conference downtown and was able to swiftly move from my lodging near Jamaica Pond to the Main Library next to the conference hotel. Boston has stellar museums and galleries. I spent a day riding between museums and galleries via streetcar. Here’s a previous post about the beautiful library which has a high tea room and bar hidden within.

Las Vegas is a great playground but expect to walk – a lot! It may be as simple as going from your hotel room to the pool but getting around takes time. Parking lots are also located far from the lobbies for all but the valet and high roller clients. It’s spendy to take Uber and Lyft and you’ll spend time waiting that you’d rather be playing. Unless your goal is to get downtown, which will mean a drive, my solution along the Strip is to take the trams and monorail! They’re free or affordable and a nice way to cool off while resting your feet.
There’s a free tram service from the Mirage to Treasure Island. The Aria Express is also free between the three MGM Resorts – The Park MGM, the Aria and the Bellagio. On the south end of the Strip, the Mandalay Bay, Luxor and Excalibur are connected by another tram system. Note that the southern and northern routes may stop at different hotels.
The Monorail Route is the most extensive and requires purchasing a ticket. You can save a bundle by getting a 24 hour pass.
.

I hope these few tips will help your urban explorations. I’ll explore more in the coming months and would love to hear which rail rides are your favorites when you have some leisure time in a city.

Is a Driving Holiday the Best Way to Travel this Year? 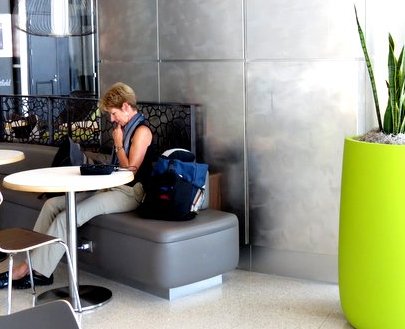 Top five American travel stress questions & how to avoid them 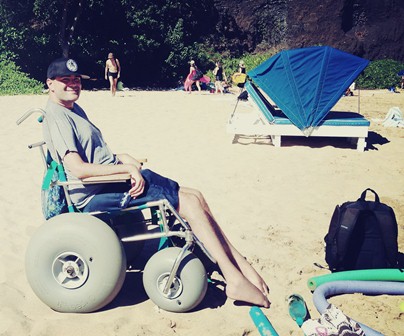