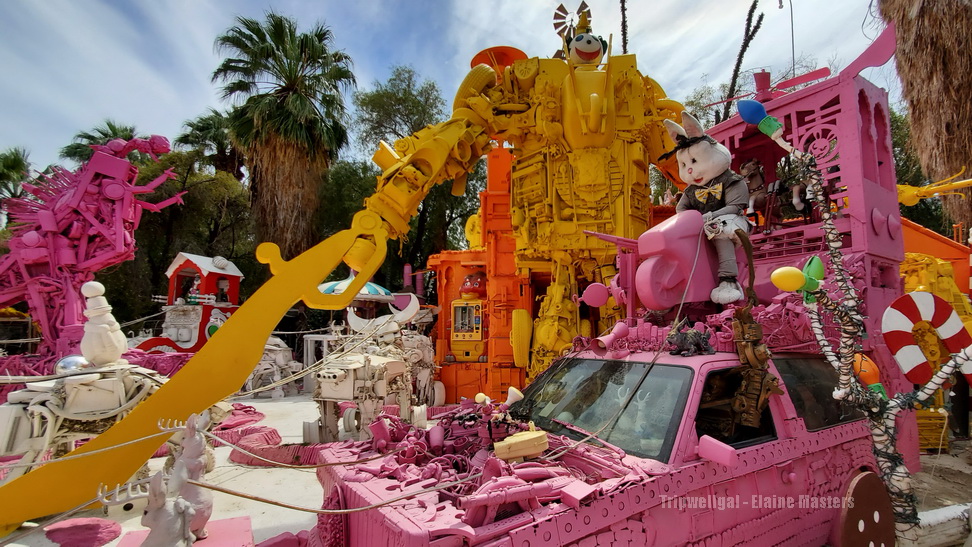 A “Why Not in a Why World” Experience

Kenny Irwin likes to build things. He makes art from cast-offs, pours resin molds, draws, assembles, and imagines. Over decades his childhood home transformed a residential corner of Palm Springs into a postmodern holiday wonderland full of robot sculpture. The corner was dark in 2019 while Irwin created a temporary Robolights in the Midwest. Don’t despair – his desert ambitions have grown. With any luck, the likes of Banksy’s Dismaland will cheerfully morph into Irwin’s new desert playground.

Robolights stirred up the quiet Movie Colony neighborhood. During its last year of operation, over 60,000 people visited through the holiday season. The rest of the year it was open by appointment. The desert installation was dark this year by design as Irwin joined forces with Detroit’s Museum of Modern Art and several dozen volunteers to create a new Robolights in the Mike Kelly Homestead space. Truckloads of locally sourced discards were glued, screwed and twisted into barely recognizable contortions. A wall was covered in discarded toaster ovens. A piano stood above a crunching metal grate. A toilet carousel was strung with lights. Thousands have bundled up to stroll with the kids, enjoy a fun if slightly twisted date night, and wander through the wacky up-cycled sculptures. The new sci-fi holiday garden was open for the holidays and will continue through May 2020. 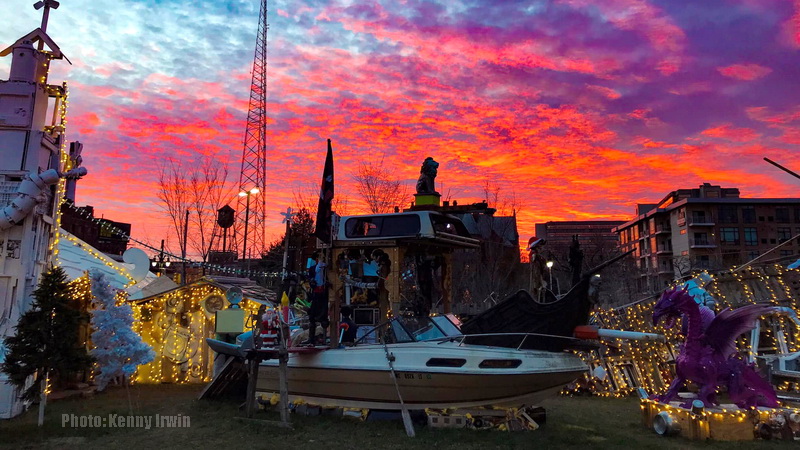 Robolights will probably illuminate the Palm Springs night again in 2020 but it’s no longer a permanent installation. Not that Irwin’s been kicked out but he’s finally realizing another long-held dream of creating a theme park experience. He just purchased a 100-acre tract in Desert Hot Springs. As his cousin and business development supervisor, Brittany Sorrentino, puts it, “We’re thinking it will probably be called Roboworld versus Robolights.” A multitude of issues need to be resolved before building can begin. Knowing Irwin’s work-ethic and focus, he just might helm the roller coaster controls by 2022. 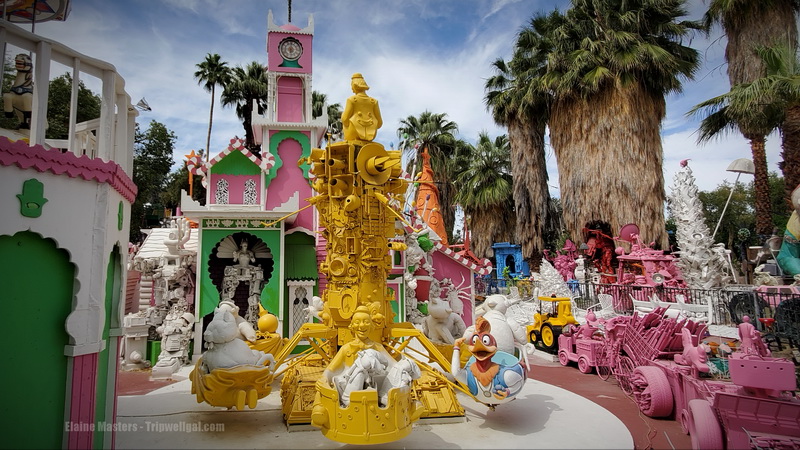 Inside the Palm Springs Robot Sculpture Garden by Kenny Irwin

I first visited Robolights on a December night several years ago. After arriving with family, we split up and I strode into the displays on my own. I passed rumbling whirligigs made of mannequins, a chorus line of bright yellow nudes, strange clowns, and gorgeous light tunnels. Snippets of carols, crooners, strange voices floated through the night air. It was exhilarating and a bit scary to take in solo but I was intrigued enough to keep going. I got lost in the roundabouts, narrow passages and marveled at how everything looked fresh and worked. Stacks of old microwaves, doorknobs, toilets and metal strainers were blended into towering figures. I recognized a Ronald McDonald statue but he menaced with a scimitar in hand. There were lots of bunnies, a fortune teller, a Chinese warrior, cartoon cats; a list would be exhaustive. One  car was covered in thousands of tokens that Irwin found online. What doesn’t show up in his driveway, he finds on Ebay and Amazon. That year donations of toys were being taken for one of the charities that he selects. On a recent daytime visit I was still intrigued but without the butterflies. 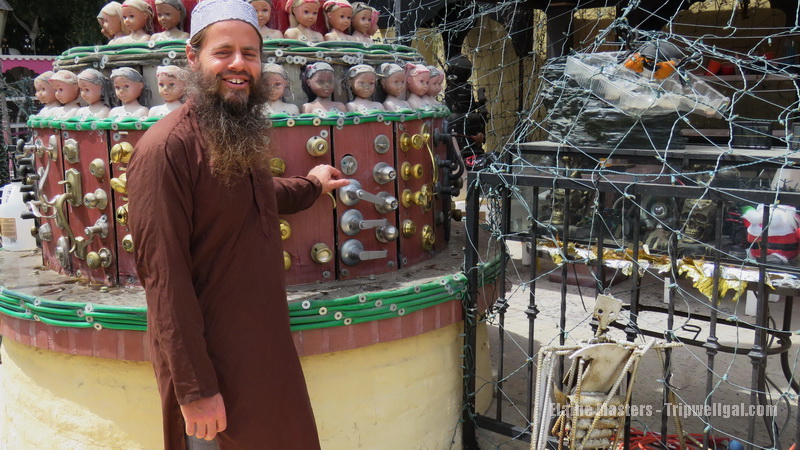 On a recent afternoon I interrupted Irwin’s work at the Palm Springs location to learn about his visions, background, and plans for the future.

EM Where do you get your ideas?

KI It’s not really inspiration, but basically dreams or I think of things on a whim. I see it in my mind, know what the form will be but it also depends on what I make it out of. Somehow I have a knowing, instinctively. In grade school they didn’t think there was water on other planets. Look now they’ve discovered oceans and more water than on earth and planets that could possibly hold life. Art, science and math are closely intertwined. I’m fascinated by science and astronomy; by nature.

EM When did you start creating things?

KI I made my first large outdoor, robot sculpture at the age of nine and have always been fascinated with aliens and things in the cosmos. My parents were very supportive; my Dad especially. In 2000, my grandmother, Pamela, published a record and coloring book about going to the moon from a story she wrote in 1960’s. In 1995 I had the first walk-through displays with 60-watt incandescent lights and multiple generators. Before long, it reached a respectable size. I owe my gratitude to my father. He always encouraged me even when someone didn’t like my work and said to keep going. We were going to go on a trip when he passed a few years ago.

On a good day I work 8-10 hours and keep loose parts out of the way to focus on the art. That bugs me. I keep it hidden then display in its splendor. It also depends on the amount of stuff people donate. Sometimes I get more than I know what to do with. 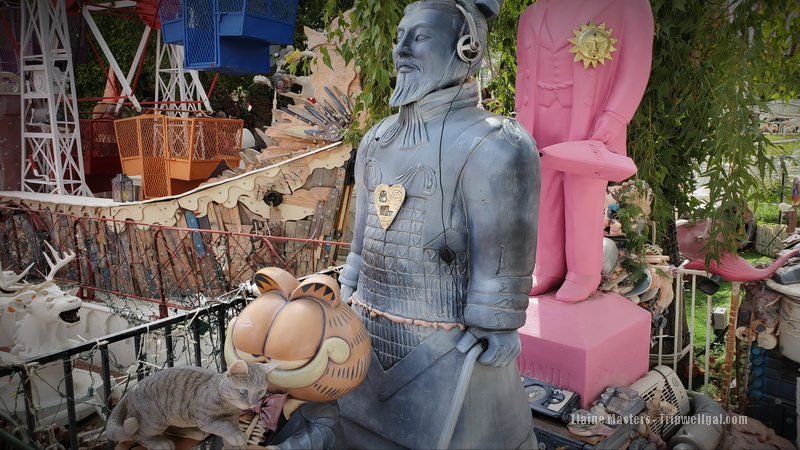 Nothing and everything is sacred inside Robolights

EM It looks like there are cultural influences from the Middle East.

KI I travel with my family and like seeing the world. I’m fascinated by everything. There’s some influence from Islam, aliens, robots, holiday themes, architectural aspects and geometrical forms. I got to see the Red Arches in Cordoba, Spain; the Taj tile work, and Mogul architecture. I love Miniature painting. It’s mind-boggling. Other influences are the Renaissance period and Roman times, Greek art; hyper-realism – like Sistine Chapel.

EM I read that you adopted Sufism.

KI There’s been some confusion. I’m Sunni Muslim and don’t know about Sufism. I was raised in a Christian family and believe in God. College was a period of enlightenment about Islam. It led me to embrace a different way, but part of Abrahamic faith teaching has the same fundamentals. Basically, people are people and entitled to believe the different ways we believe. 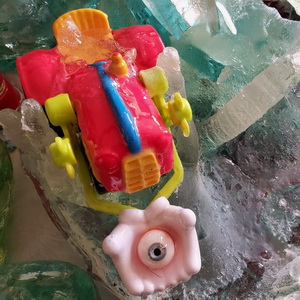 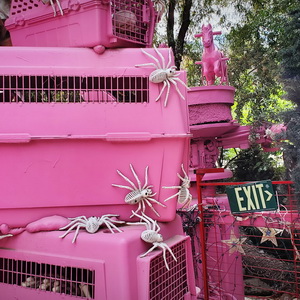 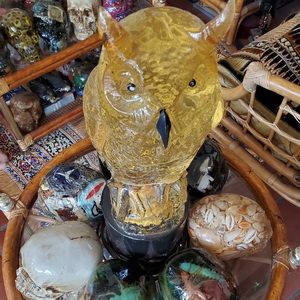 EM What will you build after the Detroit show?

KI  For years I’ve wanted a year-round attraction, not just for the holidays. My ultimate vision is an amusement park/art experience; an artmusement park with rides. It will be built to last with no rhyme or reason. A why not experience in a why world to make people laugh. I love seeing people’s reactions.

In Detroit Irwin had a chance to see lots of reactions from the helm of a tiny train ride moving through the Robolights displays. As Sorrentino says, “Kenny is always focused on the positive and bringing happiness to people’s lives, so this is just another big step in doing that.”

It may be a while but I can’t wait to ride his desert roller coaster. 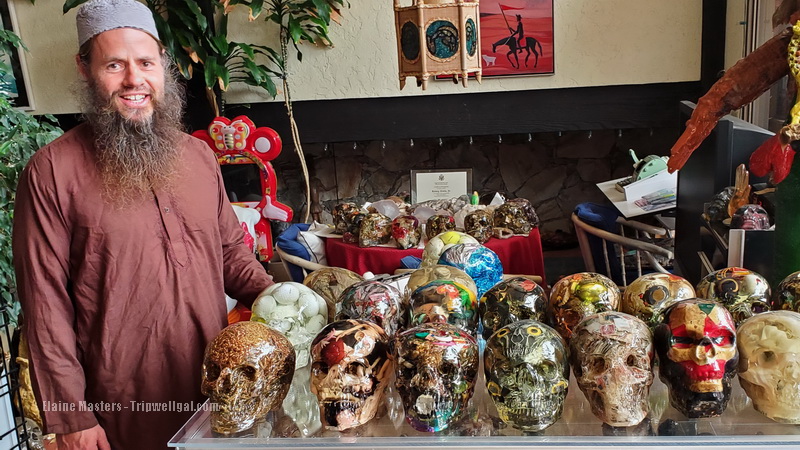 Irwin with some of his resin skulls 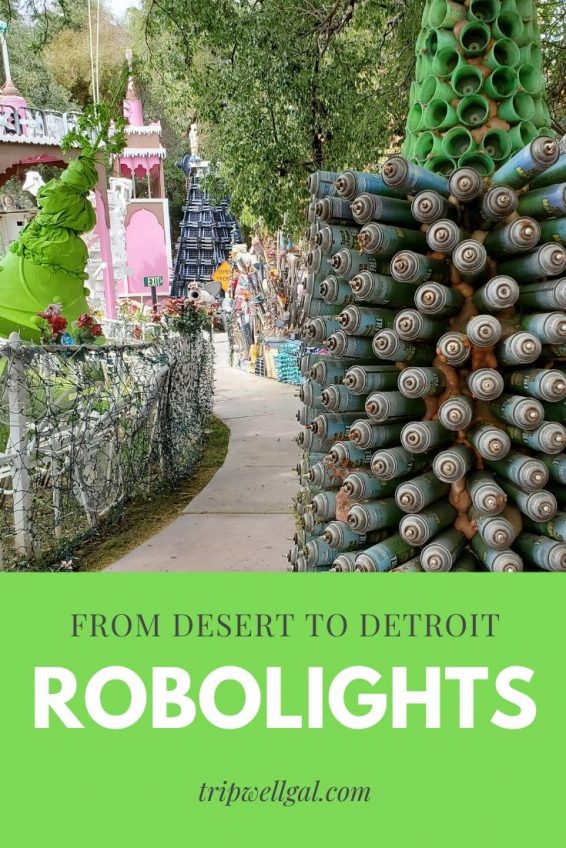 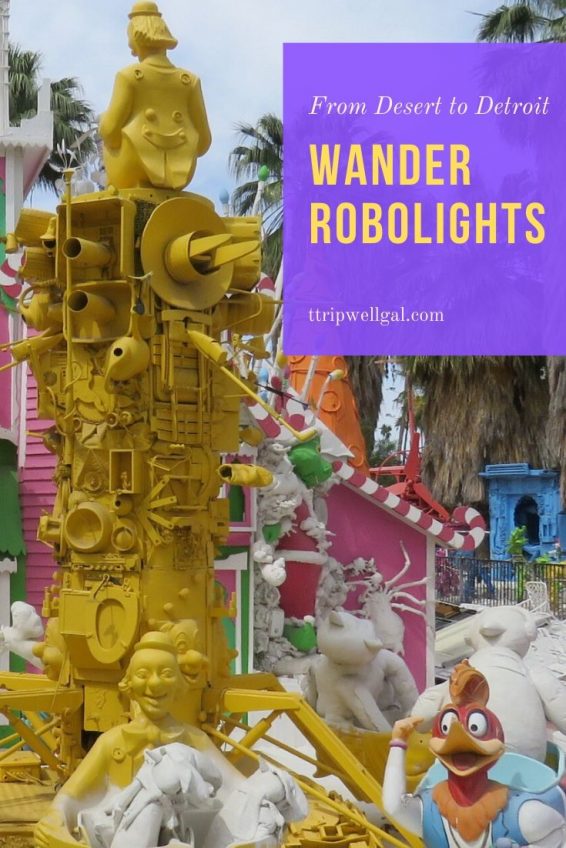 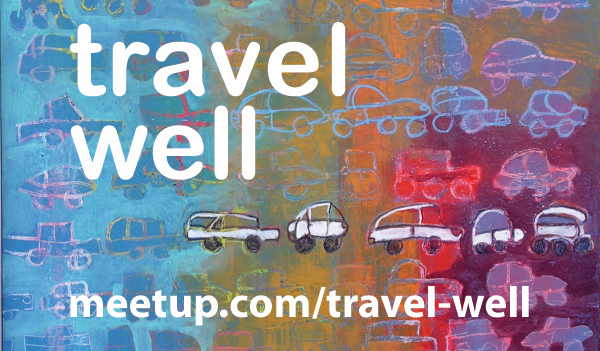 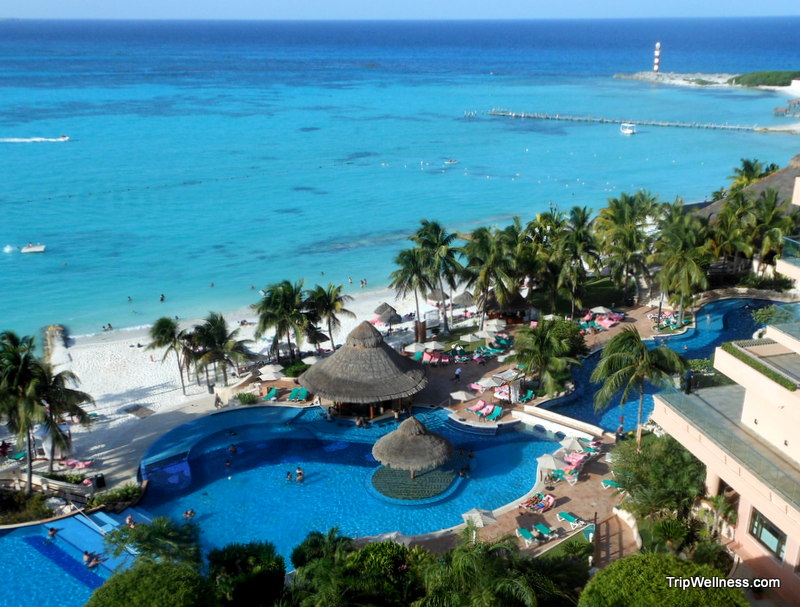 Cancun luxury – Tastings in the Yucatan