When you’re traveling on a tight budget in Switzerland, you don’t expect to fall in love with St. Moritz, the international jet setters playground. The St. Moritz winter season lures the glitterati – wealthy patrons, celebrities and politicians. The mountain backdrop is notorious for a death-defying race in an early James Bond movie, The Spy Who Loved Me. The city is famous for bobsledding and hosts international races. I wasn’t there to there to ski but to wander. Gathering my nerve I entered St. Moritz solo on the last leg of my Swiss Rail tour. (That was the only part of the trip that was comped.) 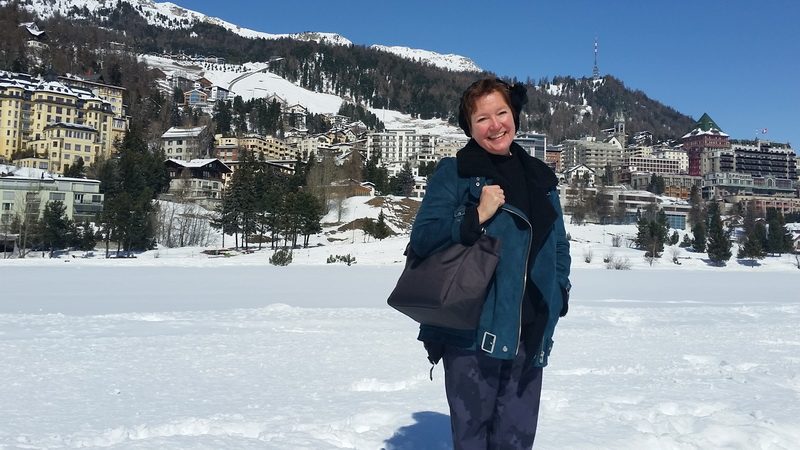 Planning a long distance trip across a new country is challenging and with all the detail juggling, I overlooked the dates of the annual Engadine Ski Marathon. For over fifty years the race has lured thousands to a crowded and swift ski run across the valley and the frozen lake. I arrived in the midst of it and of course, most hotels were booked and the few rooms left were at peak rates. That led me to Celerina, one of the nearby mountain villages. My needs were simple – a quiet, clean place for the night near the train line and I found so much more. 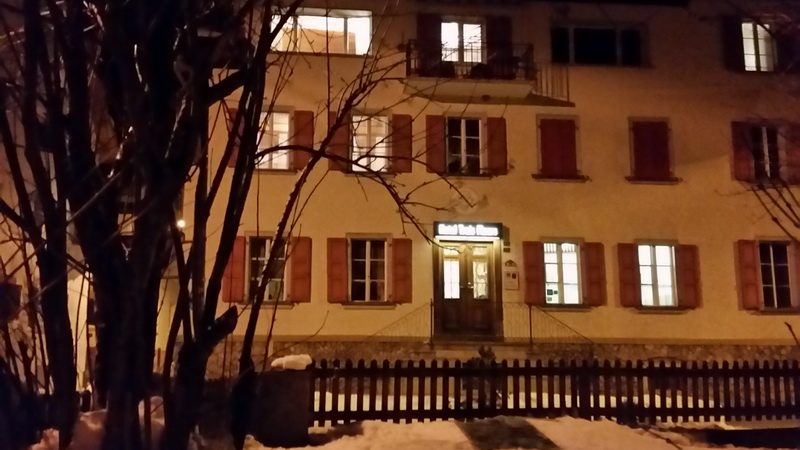 Ten minutes from St. Moritz I pulled my suitcase down a village street and into Hotel Trais Fluors. I had one of the last rooms on the top floor and except for the bathroom down the hall, it was perfect. I arrived late and hungry. Wandering the quiet streets in the direction my host suggested to find dinner, I stepped into the Hotel Arturo dining room.  My counter seat was comfortable and made it easy to people-watch without feeling conspicuous. The restaurant was run by several friendly women who took my solo situation in stride. They suggested the house specialty, a chicken schnitzel platter, and a tasty aperitif. 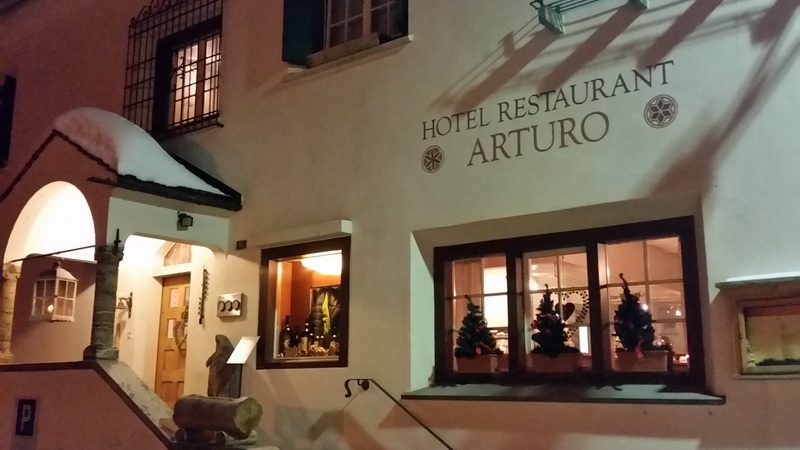 The inviting windows of Hotel Arturo in Celerina 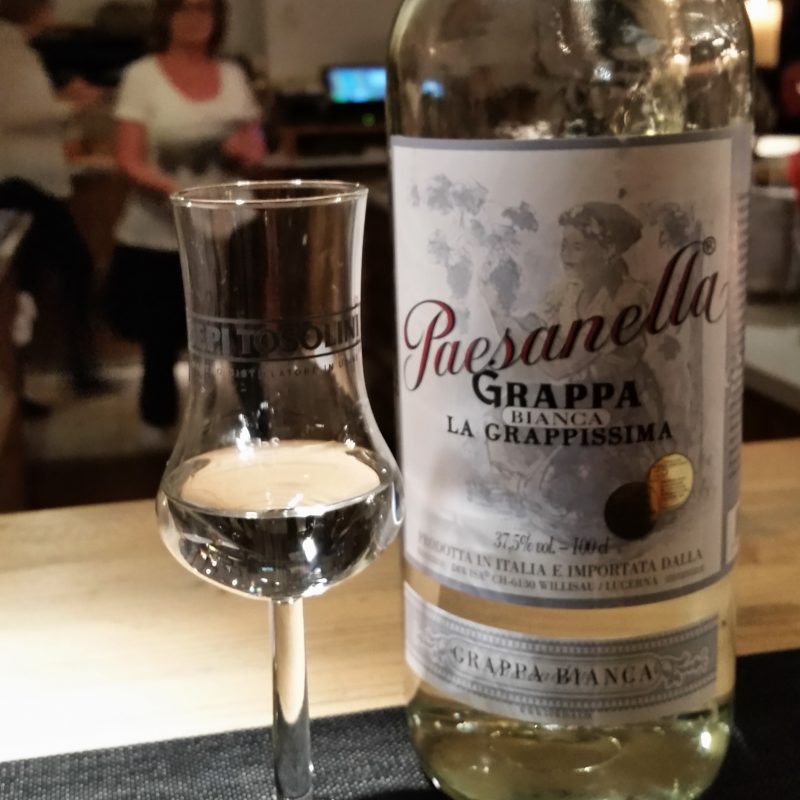 The next morning I was up early to get to make the most of my short visit. The St. Moritz station is situated between the lake and the hillside town. There are trails and buses but with sunshine and an open day to wander, I tackled the sloping sidewalk. 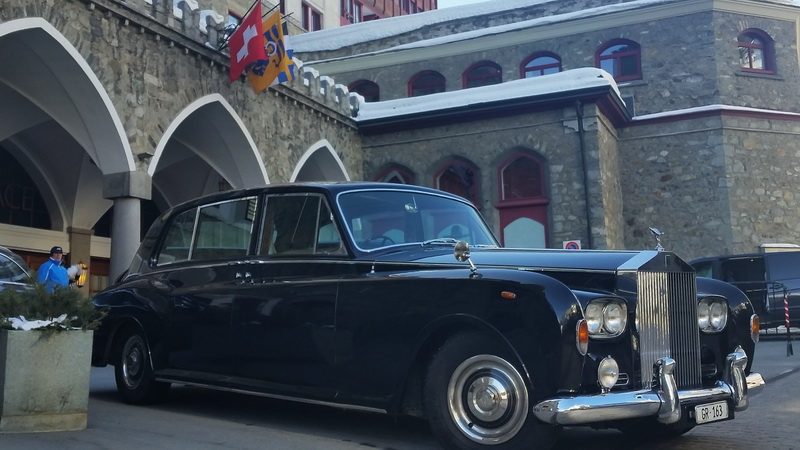 Store windows didn’t lure me, I wasn’t there to shop. I was looking for views, architecture, and to get a sense of this storied place. On the way, I stopped in several noble hotels like the posh Klum, where the first electric light shone in 1878. In the 1800s few put a St. Moritz winter vacation on their itineraries, they came in the summer for ‘wellness’ trips and mountain air. An enterprising hotelier invited four friends to discover all there was to do during a St. Moritz winter. They returned months later to Europe with glorious tans and adventure stories. Winter here has been busy ever since. 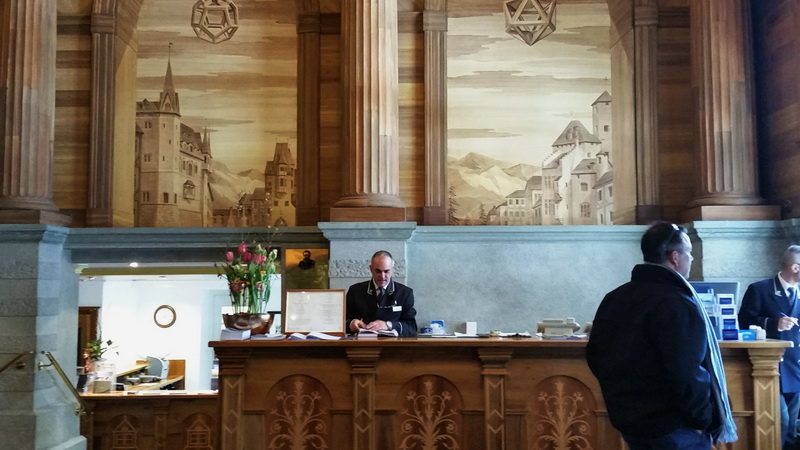 As I was walking towards the river, I noticed a beautiful stone building on the hillside. It sat above the street with round stone walls and stairs. The Segatini Museum is dedicated to the 19th-century realistic symbolism painter Giovanni Segatini, who is considered a national treasure. I wandered the quiet galleries enjoying his interpretations of Alpine landscapes and scenes. 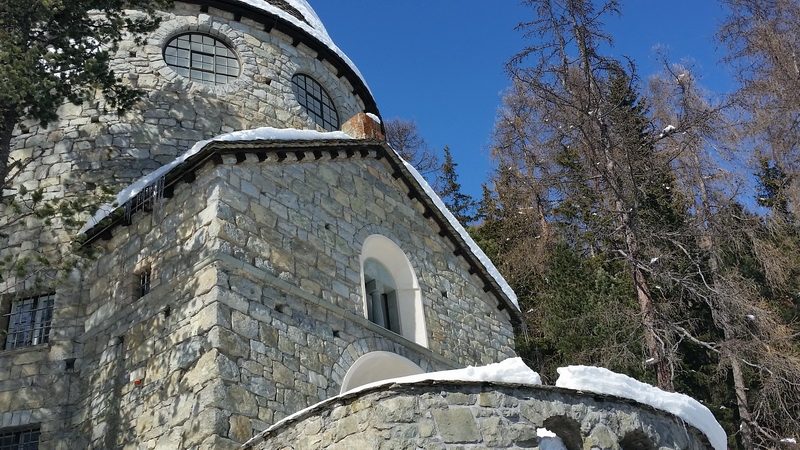 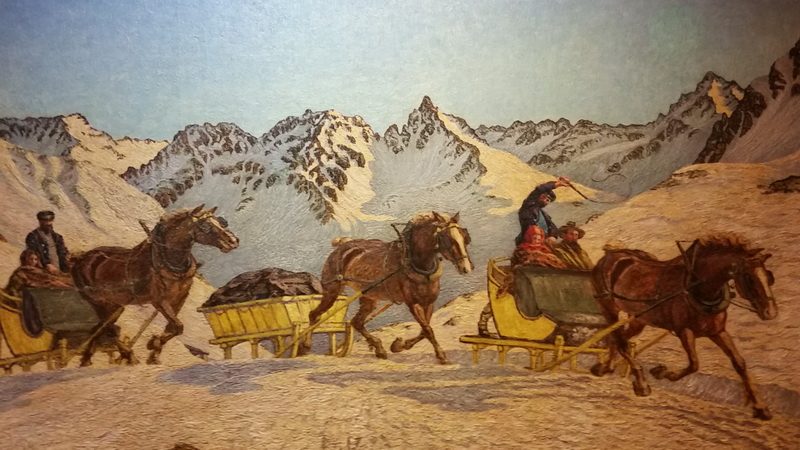 One of Segatini’s winter landscapes in St. Moritz

While peering through a deep-set museum window, I spied a tent in the middle of the frozen lake below. The museum receptionist suggested that I have lunch there and I didn’t need convincing. It was such fun to wander down the hillside, watching as small groups of people strolled across the ice. One couple asked me to take their picture and they then took one of me. It’s one of my favorite shots from the trip. The casual lunch spot had tables and chairs draped in fur throws. Soon I was nibbling on grilled sausage and sipping warm Gluwein. From that sunny vantage point you could look up to the town, across the lake, and into wintry valleys. The view and setting made it one of the most memorable meals of my time in Switzerland – and one of the most affordable. 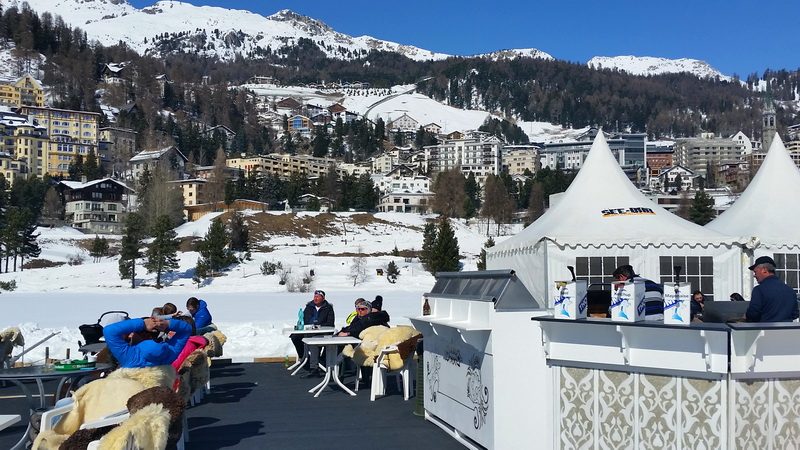 The impromptu cafe in the middle of St. Moritz winter.

A church steeple drew my attention. It was just across a small footbridge where people were feeding ducks. It was a sweet spot to rest my feet before heading back to the train station. I didn’t tackle that without fortification and stopped for a rich espresso with a slice of strudel. No wonder I didn’t need dinner before bed! 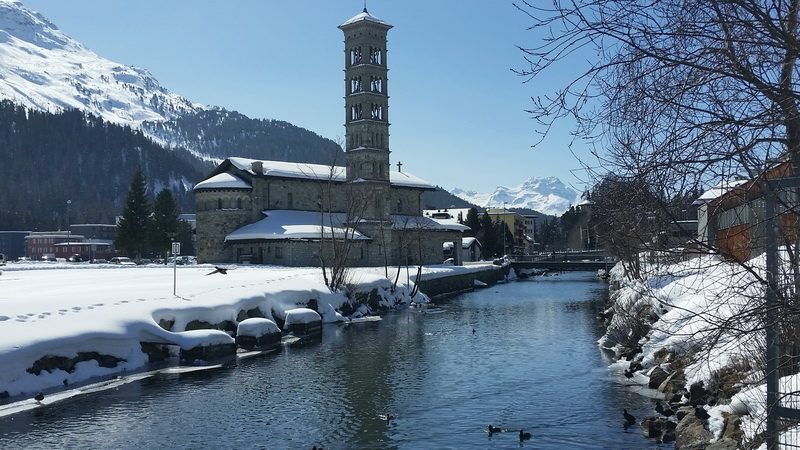 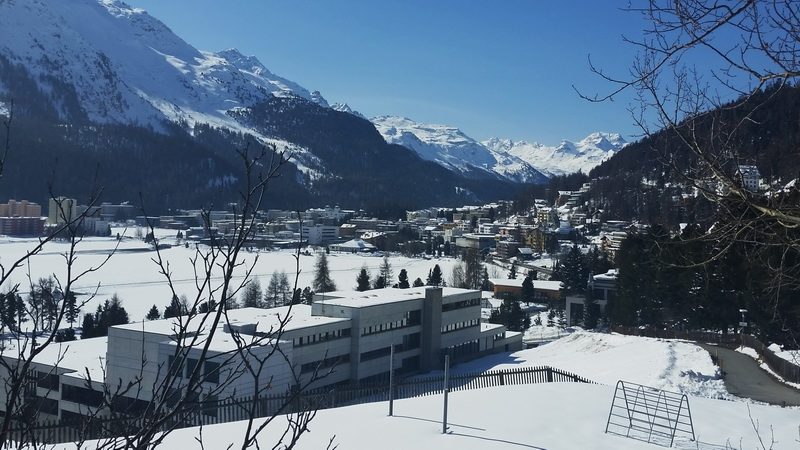 My St. Moritz adventure drew to a close early the next morning but not before the annual cross country marathon began. I would have loved to watch the skiers cross the lake but settled for glimpsing the crowd from my train up to Alp Grum. 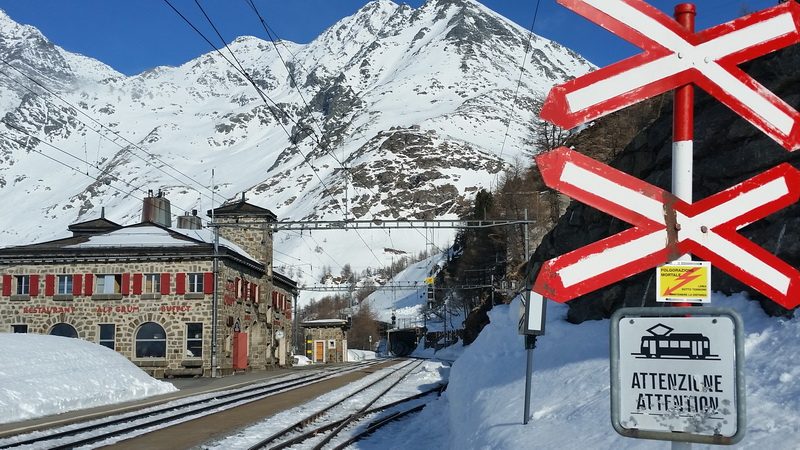 “I get so fed up on a train that after five minutes I’m howling with boredom,” wrote Gustave Flaubert in the nineteenth century. He didn’t know Swiss Rail travel as it is today.

Flaubert never rode the Bernina line through alpine valleys, past glaciers, and startlingly beautiful mountain peaks. The beauty of the Alps to the Mediterranean in the south and glorious glass-domed cars have given the railway the recent listing as a UNESCO World Heritage site. When I left St. Moritz, my last stop in the Swiss Alps was for lunch at the Alp Grum station before tracing back to ride down towards the warmer lands near Lugano and the Italian border. It was a long ride but with the gorgeous views and delicious food on board, boredom was never an issue. Read more about the train trip in this earlier post. 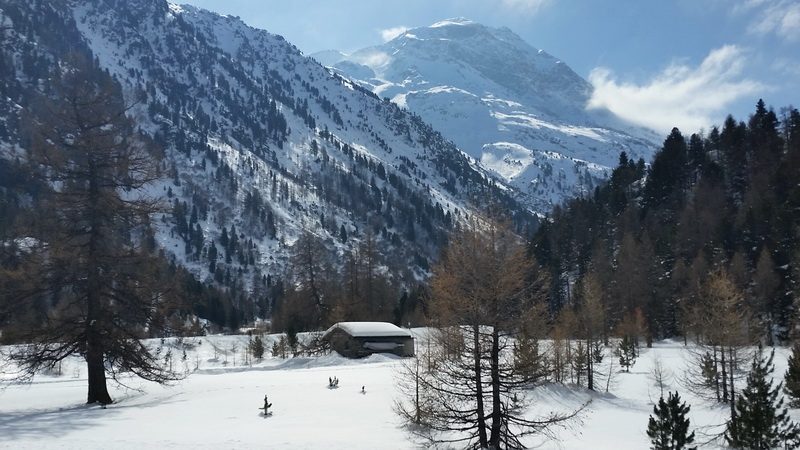 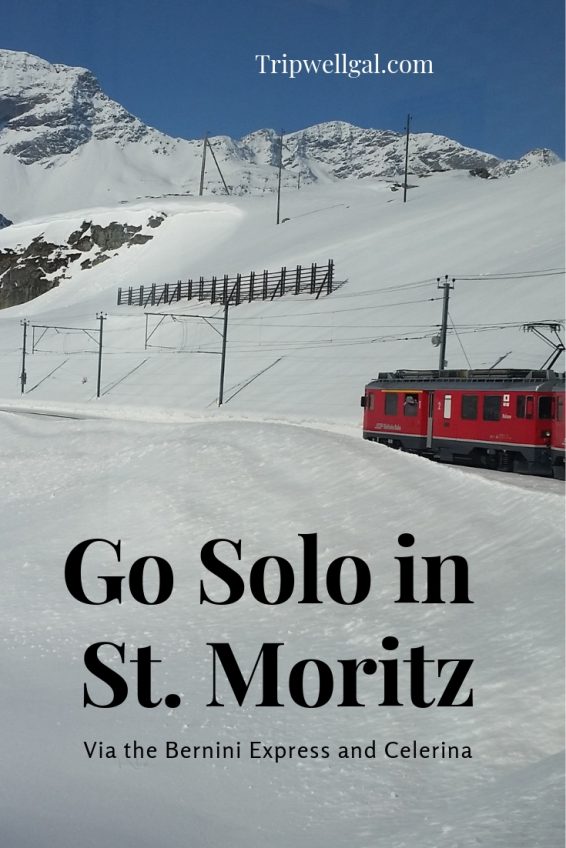 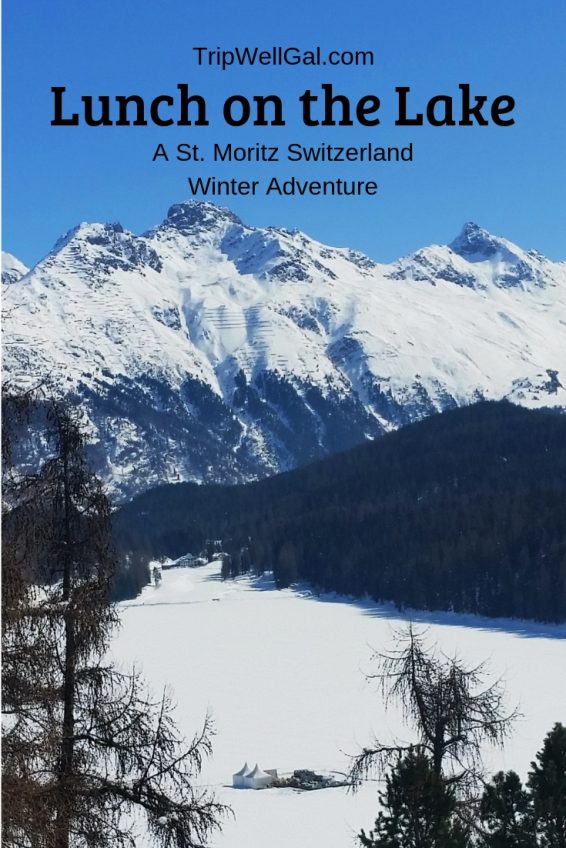