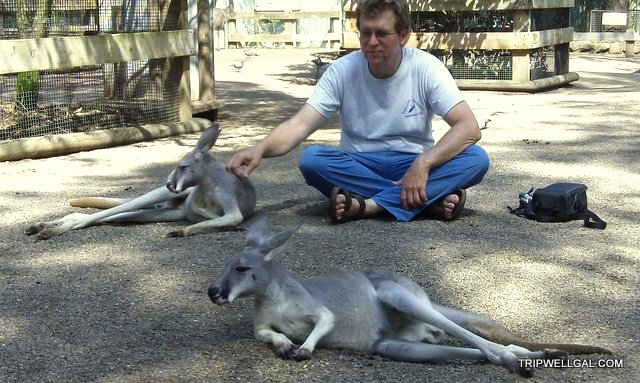 Kangaroo treat outside of Sydney

The next morning we were up early and headed north of town to the Featherdale Wildlife Park. This was my first trip to Australia, and a brief one, so high on my list was seeing Koala’s and Kangaroos up close. The most romantic notion is come across them in the outback, but that would take more time than I had and I suppose really only happens in the movies. There’s a world class zoo just across from the Quay by ferry, the Taronoga, and it gets rave reviews, but we only had a few hours. So we headed to the  smaller park, housing about 2,000 critters. It also gave us a chance to get out of downtown Sydney for a taste of the suburbs. Odd place for a wildlife park!

We watched small, eager penguins feeding, massaged a Koala’s back ( dozens of them there!), fed Wallabys, Kangaroo and prowling Emus. We watched yellow and white Dingos sleeping, tall Cassowary’s gulp whole chunks of apple, and a large (at least 12 feet long) Sea Crocodile jump for his breakfast.

I’ve read stories about these huge hunters from the northern counties. They’ve famously snapped up waders in the estuaries of Cairns, but in New South Wales they are only seen in captivity. The crocodile was also the hardest animal to watch in the park, as the gigantic reptile repeatedly leapt up, snapping his jaws several times, before gaining his lunch and slipping back into the shallow pool to digest and nap. I suppose his life is easy (and less dangerous for everyone) but so much less noble than in the wild.

On I wound through the many open viewing areas and glimpsed a Tasmanian devil speed out of his burrow, then plop onto his side in the sunshine. I marveled at Laughing Kookaburas, and all kinds of birds with amazing names.

Afterwards we headed south to the pleasures of famous Bondi Beach. It’s a perfect arc of sand, with joys for every sun lover. The sand was powdery and warm, and the surf enticing. The calmer south end had rocks to snorkel and jump from as well as a childrens pool. Worried about getting out through the surf, I managed to get into my gear and leap into the cool water with some semblance of grace.

While it was murky, we saw many urchins and small tropical fish. A small, non-poisonous jelly floated past and one swimmer pulled a small Snapper out of the water on his spear. There were dozens of young boys splashing in the swell, beauties in bikinis (or less!) and happy parents playing with gurgling infants. I can see why Bondi is so popular.

We stayed through dinner time, and wandered up hillside streets for a moveable feast. There were creatively spiced chunks of delicious, flaky fish at the Gourmet Fish & Chips shop, and a generous papaya salad next store at a Thai cafe. Too full, we only oogled Spanish chocolate bon bons (www. Sanchurro.com). The streets were full of small groups, each sunburnt, happy and chattering in the warmth of twilight. We headed back through town content and to prepare for diving the next day. 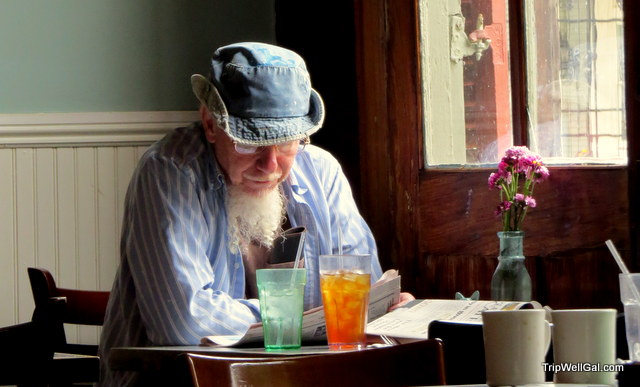 12 Feasts for the Soul – New Orleans Food and Spirits 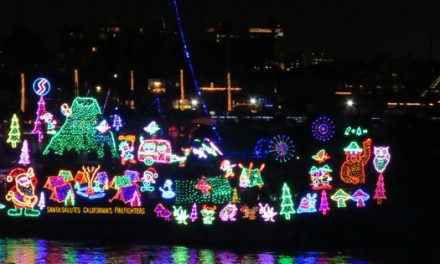